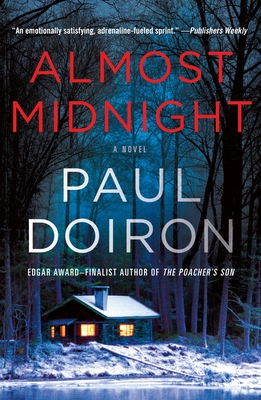 This is book number 10 in the Mike Bowditch Mysteries series.

While on vacation, Warden Investigator Mike Bowditch receives a strange summons from Billy Cronk, one of his oldest friends and a man he had to reluctantly put behind bars for murder. Billy wants him to investigate a new female prison guard with a mysterious past, and Mike feels honor-bound to help his friend. But when the guard becomes the victim in a brutal attack at the prison, he realizes there may be a darker cover-up at play—and that Billy and his family might be at risk.

Then Mike receives a second call for help, this time from a distant mountain valley where Shadow, a wolf-hybrid he once cared for, has been found shot by an arrow and clinging to life. He searches for the identity of the bowman, but his investigation is blocked at every turn by the increasingly hostile community. And when Billy’s wife and children are threatened, Mike finds himself tested like never before. How can he possibly keep the family safe when he has enemies of his own on his trail?

Torn between loyalties, Mike Bowditch must respond in the only way he knows how: by bending every law and breaking every rule to keep his loved ones safe and the true predators at bay.

"The characters are well drawn, the Maine landscape is vividly portrayed, and Bowditch pursues his passion to protect the innocent and bring evil doers to justice regardless personal cost." —Associated Press

“Almost Midnight twists between two crises like a braid being drawn ever tighter…each storyline reveals deeper truths about Bowditch and what ties him to people and things he loves…Doiron’s storycraft is razor sharp.”—Maine Sunday Telegram

"Doiron writes with eloquence, authority, and passion about Maine’s wilderness and its creatures...an emotionally satisfying, adrenaline-fueled sprint. Fans of C.J. Box will find much to admire." —Publishers Weekly

"Doiron...[ramps] up the tension slowly until the story reaches can't-put-it-down velocity." —Library Journal

“Fans of outdoors procedurals, like those by William Kent Krueger or C. J. Box, will be delighted to get to know the consistently strong Mike Bowditch series, now in its tenth installment.” —Booklist

“Few writers can summon a place as well as Paul Doiron depicts rural Maine…he has Raymond Chandler’s touch for the tiny detail that makes a place central to a story…a rare treat.” —The Globe and Mail

“Doiron has brilliantly developed his protagonist…The cherry on top is Doiron’s ability to continue mixing smart plots with vibrant descriptions that help transport readers into the Maine wilderness, where they’ll stand shoulder-to-shoulder with Mike, feeling every ounce of heart-thumping suspense along the way.” —Ryan Steck, The Real Book Spy

"[A]ction-packed and compelling...once again, Doiron paints a picture of a Maine that...will feel authentic to those who've grown up in similar places with similar histories." —Bangor Daily News