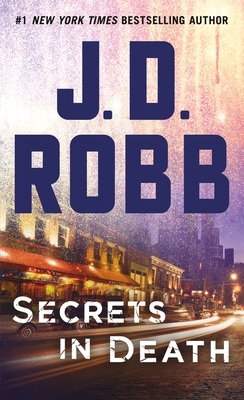 This is book number 45 in the In Death series.

Eve Dallas fights to separate rumors from reality when a woman who traffics in other people’s secrets is silenced, in the newest novel in the #1 New York Times bestselling series.
Du Vin isn’t the kind of bar Lieutenant Eve Dallas would usually patronize—nor the kind where a lot of blood gets spilled. But one February evening, a mortally wounded woman stumbles out of the chic Manhattan nightspot’s ladies’ room. Larinda Mars is a self-described “social information reporter,” or in more old-fashioned terms, a professional gossip. She also had a side business in blackmail. Setting her sights on rich, prominent marks, she’d learn what they most wanted to keep hidden and then bleed them dry. Now someone’s done the same to her, literally—with a knife to the brachial artery.
Eve didn’t like Larinda Mars. But she likes murder even less. To find justice for this victim, she’ll have to discover what dirty secrets Larinda Mars used to victimize others. But along the way, Eve may be exposed to information she really didn’t want to know…

J. D. Robb is the pseudonym for #1 New York Times bestselling author Nora Roberts. She is the author of over 230 novels, including the futuristic suspense In Death series. There are more than 500 million copies of her books in print.