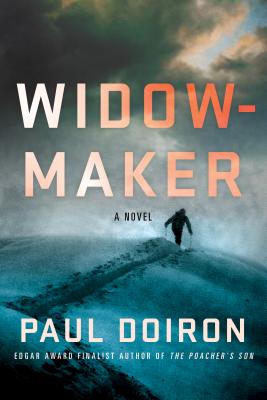 This is book number 7 in the Mike Bowditch Mysteries series.

In Paul Doiron's riveting novel Widowmaker, Game Warden Mike Bowditch is on the trail of a ruthless vigilante amid the snow-covered mountains of Maine

When a mysterious woman in distress appears outside his home, Mike Bowditch has no clue she is about to blow his world apart. Amber Langstrom is beautiful, damaged, and hiding a secret with a link to his past. She claims her son Adam is a wrongfully convicted sex offender who has vanished from a brutal work camp in the high timber around the Widowmaker Ski Resort. She also claims that Adam is the illegitimate son of Jack Bowditch, Mike’s dead and diabolical father—and the half-brother Mike never knew he had.

After trying so hard to put his troubled past behind him, Mike is reluctant to revisit the wild country of his childhood and again confront his father’s history of violence. But Amber’s desperation and his own need to know the truth leads Mike on a desperate search for answers—one that takes him through a mountainous wilderness where the military guards a top-secret interrogation base, sexual predators live together in a backwoods colony, and self-styled vigilantes are willing to murder anyone they consider their enemies. Can Mike finally exorcise the demons of the past—or will the real-life demons of the present kill him first?

“A violent, suspenseful, fast-paced tale written in Doiron's customary tight, vivid prose, with his keen eye for both idiosyncratic Maine characters and the beauty of the natural landscape.” —Associated Press

“Doiron continues to deliver vivid descriptions of rural Maine, a satisfying mystery (this one with tantalizing loose ends), and a conflicted main character. Those who relish outdoor mysteries, especially ones set in New England, will appreciate this latest entry.” —Library Journal

“Paul Doiron is shaping up as the Tony Hillerman of the east. . . . presenting central characters who are brave and brainy but all too human and fallible. . . . [Doiron’s] storytelling is controlled and always enthralling. Just like Tony Hillerman’s.” —Toronto Star on The Precipice

“Doiron brings his gift for making the Maine woods live and breathe to a taut whodunit in his stellar sixth novel featuring game warden Mike Bowditch. . . . Multidimensional characters and a high level of suspense help make this a winner.” —Publishers Weekly (starred) on The Precipice

“Bad Little Falls is a jewel of a book. Doiron has gotten it all magnificently right: a hell of a good mystery, beautifully drawn landscape and characters so evocatively written they follow you off the page. Buy this. The guy can write.” —Nevada Barr, New York Times bestselling author of Rope
“Doiron’s series keeps getting better and better...The Precipice will keep readers guessing—and biting their nails—right until the end. New readers can jump into the series here just fine, but be warned: You’ll be compelled to read the rest.”—RT Book Reviews (Top Pick)
“Doiron's third Bowditch entry is riveting and honest, with full-depth characters and a landscape that isn't cutting any slack. Readers of Nevada Barr and C. J. Box will enjoy this similar tale, with the added surprise of a refreshing hero whose youth and inexperience Doiron skillfully twists into an asset.” —Booklist

“A high-stakes, high-tension yarn in which you keep wishing everything would turn out fine for the deeply flawed, deeply sympathetic hero.” —Kirkus