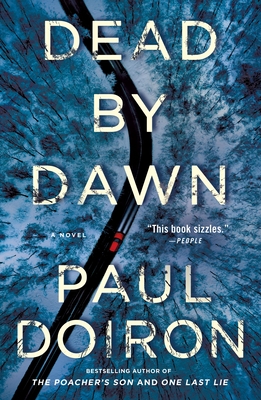 This is book number 12 in the Mike Bowditch Mysteries series.

Maine game warden Mike Bowditch finds himself in a life-or-death chase in this next thriller in the bestselling series by Edgar Award nominee Paul Doiron, Dead by Dawn.

Mike Bowditch is fighting for his life. After being ambushed on a dark winter road, Bowditch crashes his Jeep into a frozen river. Trapped beneath the ice in the middle of nowhere, having lost his gun and any way to signal for help, Mike fights his way to the surface. But surviving the crash is only the first challenge. Whoever set the trap that ran him off the road is still out there, and they’re coming for him.

Hours earlier, Mike had been called to investigate the suspicious drowning of a wealthy professor. Despite the death being ruled an accident, the victim's elegant, eccentric daughter-in-law insists the man was murdered. She suspects his companion that day, a reclusive survivalist and conspiracy theorist who accompanied the professor on his fateful duck-hunting trip—but what exactly was the nature of their relationship? And was her own sharp-tongued daughter, who inherited the dead man’s fortune, as close to her grandfather as she claims? The accusations lead Mike to a sinister local family who claim to have information on the crime. But when his Jeep flies into the river and unknown armed assailants on snowmobiles chase him through the wilderness, the investigation turns into a fight for survival.

As Mike faces a nightlong battle to stay alive, he must dissect the hours leading up to the ambush and solve two riddles: which one of these people desperately want him dead, and what has he done to incur their wrath?

Winner of the 2022 Maine Literary Award for Crime Fiction

“A nail-biter in a nightlong fight for survival in the Maine wilderness....[Doiron proves] his mastery of pacing and suspense. Frostbite aside, this book sizzles.” –People Magazine

“The 12th novel in Paul Doiron's unwaveringly superb series about a courageous, battle-tested Maine game warden...a wilderness survival story as compelling Jack London’s classic short story, ‘To Build a Fire’....the prose is as sharp as an arrow and so lyrical that it sometimes borders on poetry.” –Associated Press

“Maine writer Paul Doiron has demonstrated he is a master at crafting compelling mysteries...unequivocally his best yet.”—Maine Sunday Telegram

“Nail-biting...the best yet in a superior series.” –Publishers Weekly (starred)

"Fans of Mike Bowditch mystery novels will not be disappointed." --Boston.com

"[A] gripping thriller...relentless in pace and plotting." --Milwaukee Journal Sentinel

Praise for One Last Lie:

"This novel is something of a departure for Doiron... the suspenseful, fast-paced plot has more twists and turns than usual." —Associated Press

"Before you read this book, clear your schedule. It’s the kind of story best read in one gulp...[Doiron] keeps getting better." —New York Journal of Books

“One Last Lie is a triumph for aficionados and newcomers alike. The secrets, old and new, are compelling, and Doiron's landscape imagery is perfectly balanced (as is the literary history)...Trust, friendship, love, faith and how the family we choose holds powerful sway is at the heart of this impressive series entry.” —Shelf Awareness

“Doiron’s masterful plotting pulls it all together, and the reader gets to meet an odd assortment of extraordinarily well-defined characters—good guys and bad—while learning more about both the natural and the political history of the Pine Tree State.” —Booklist

Praise for Paul Doiron and the Mike Bowditch mysteries:

"The characters are well drawn, the Maine landscape is vividly portrayed, and Bowditch pursues his passion to protect the innocent and bring evil doers to justice regardless of personal cost." —Associated Press for Almost Midnight

"Doiron...[ramps] up the tension slowly until the story reaches can't-put-it-down velocity." —Library Journal for Almost Midnight

“As always with a Doiron novel, the characters are so well-drawn you can almost reach out and shake their hands, and the rural landscape is so vividly portrayed that the reader can smell wildflowers, marvel at the swarms of fireflies and feel the sting of the blood-thirsty insects. But the author's finest achievement is the evolution of Mike Bowditch himself.” —Bruce DeSilva, Associated Press for Knife Creek

"...the 12th novel in Paul Doiron's unwaveringly superb series about a courageous, battle-tested Maine game warden...a wilderness survival story as compelling Jack London’s classic short story, “To Build a Fire....the prose is as sharp as an arrow and so lyrical that it sometimes borders on poetry." - Associated Press