The Mars Challenge: The Past, Present, and Future of Human Spaceflight (Hardcover) 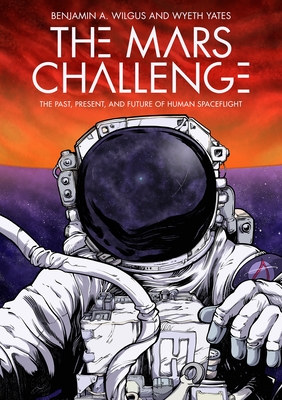 The Mars Challenge: The Past, Present, and Future of Human Spaceflight (Hardcover)

Travel to deep space and back again with The Mars Challenge, a nonfiction graphic novel for teens about the science and logistics of a manned mission to Mars.

Nadia is a teen with a dream: to be the first woman on Mars. But to get there, she's got to learn all she can about the science of spaceflight. It's a good thing her friend Eleanor is an Attitude Determination and Control Officer—basically, she pilots the International Space Station!

Eleanor takes Nadia on a conceptual journey through an entire crewed mission to Mars, and explains every challenge that must be overcome along the way; from escaping Earth's gravity well, to keeping the crew healthy as they travel through deep space, to setting up a Mars base, to having enough fuel for the trip home!

In The Mars Challenge, writer Benjamin A. Wilgus and artist Wyeth Yates bring the reader on a thrilling interplanetary voyage and clearly illustrate the scientific concepts and complex machinery involved. Humans can reach Mars in our lifetime—this book explains how it can be done.

Benjamin A. Wilgus is a Brooklyn-based bestselling writer, editor, and cartoonist who's been working in comics for over a decade. He is the author of the SF graphic novel duology Chronin (Tor Books), which NPR called “timeless in more ways than one,” and Book Riot called “magical,” and which has garnered a host of glowing reviews. His middle grade graphic novel Science Comics: Flying Machines (with artist Molly Brooks) was named one of the National Science Teachers Association’s Best STEM Books for 2018. He is also the writer of the YA graphic novel The Mars Challenge (with artist Wyeth Yates). Benjamin's New York Times bestselling work has been published by DC Comics, Dark Horse, Del Rey, and Scholastic, and he served as a script and story writer for Cartoon Network's "Codename: Kids Next Door." In his spare time, he co-hosts a podcast about comics publishing called "Graphic Novel TK" with Gina Gagliano.

Wyeth Yates is a comic book artist based in Brooklyn, NY. He is currently the artist on The Mars Challenge (First Second Books), and The Castoffs (Lion Forge). Self-Published titles include Hard Luck, Sundrenchers, and The Other Gang. He can often be spotted in the wild scribbling page layouts at Angelica’s Coffee Shop on Church Ave, or taking his cat for walks in the park. He has been making comics at the same desk for fourteen years, and hopes to be able to keep that up for at least fourteen more.
"An approachable read for those interested in both Mars and spaceflight in general, not to mention a useful classroom resource."—Booklist