The Helm of Midnight (The Five Penalties #1) (Paperback) 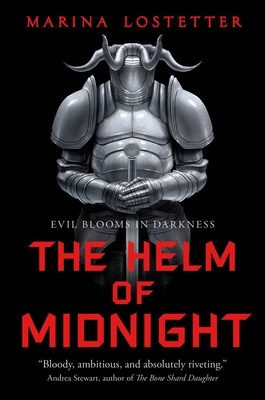 The Helm of Midnight (The Five Penalties #1) (Paperback)

This is book number 1 in the The Five Penalties series.

Hannibal meets Mistborn in Marina Lostetter’s THE HELM OF MIDNIGHT, the dark and stunning first novel in a new trilogy that combines the intricate worldbuilding and rigorous magic system of the best of epic fantasy with a dark and chilling thriller.

In a daring and deadly heist, thieves have made away with an artifact of terrible power—the death mask of Louis Charbon. Made by a master craftsman, it is imbued with the spirit of a monster from history, a serial murderer who terrorized the city.

Now Charbon is loose once more, killing from beyond the grave. But these murders are different from before, not simply random but the work of a deliberate mind probing for answers to a sinister question.

It is up to Krona Hirvath and her fellow Regulators to enter the mind of madness to stop this insatiable killer while facing the terrible truths left in his wake.

Marina Lostetter (she/her) is the author of Noumenon and Noumenon: Infinity. The Helm of Midnight was her first foray into fantasy. Originally from Oregon, she now resides in Arkansas with her husband, Alex. When not writing or drawing she can often be found reading spec-fic, or playing it (she enjoys a good zombie-themed board game now and again). And she does it all while globetrotting.

Praise for The Helm of Midnight

"Marina Lostetter brings together a cast of relatable, remarkably human characters across three separate timelines to tell a beautiful story of struggle, loss and, eventually, triumph... Tears, smiles and surprise await any reader that opens this book."—Bookpage, starred review

"The Helm of Midnight transports readers to an intensely unique and creative world, with interwoven secrets and heart-pounding action. Bloody, ambitious, and absolutely riveting."—Andrea Stewart, author of The Bone Shard Daughter

"A mysterious and mind-ripping journey through the mystic depths of time and the darkness of the human psyche." —Matt Wallace, author of the Sin du Jour and Savage Rebellion series

"Beautiful and vicious, The Helm of Midnight will snare you with its intriguing mystery and then enthrall you with its rich characters and inventive world."—Megan E. O'Keefe, author of Velocity Weapon

"An utterly enthralling mystery of magic, masks, and murder. Marina Lostetter weaves together three stories to a stunning conclusion with a skill that will leave you breathless."—K. B. Wagers, author of the Farian War series

"A tense and atmospheric mystery in an inventive fantasy setting, Lostetter weaves three stories of trauma and grief together with skill and suspense to a thrilling conclusion."—Sam Hawke, author of City of Lies

"A firecracker.... What makes this book a captivating read is not merely the tight prose and exquisite use of language to create tension, but the master craft level of world building that offers much more to the fantasy genre than the usual fare. Don’t pass this one by, it’s too good.”—New York Journal of Books

"This tale has creative worldbuilding and an intense focus on the psychology of a killer."—Library Journal

“Lostetter expertly balances the thrill of discovery with the interpersonal consequences of an isolated community. The tools of speculative fiction are deployed with heart-rending attention to emotional reality in this enthralling odyssey. A striking adventure story that could hold a galaxy in its scope.” —Kirkus Reviews, starred review

“[An] ambitious and stunning debut...Lostetter handles a complex and fractured narrative masterfully, never allowing her novel to become confusing or unconvincing. There are no easy answers to the book’s questions, but the lingering sense of wonder and discovery thoroughly justifies its title.” —Publishers Weekly, starred review

“Noumenon...offers a dreamlike exploration of evolving societies and the many ways humans can control, fight and love each other.” —The Washington Post