Dune: The Lady of Caladan (The Caladan Trilogy #2) (Hardcover) 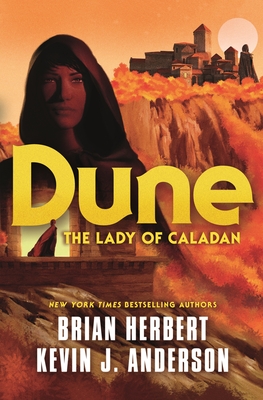 Dune: The Lady of Caladan (The Caladan Trilogy #2) (Hardcover)

This is book number 2 in the The Caladan Trilogy series.

From Brian Herbert and Kevin J. Anderson, Dune: The Lady of Caladan is a brand new novel in the internationally bestselling Dune series.

Lady Jessica, mother of Paul, and consort to Leto Atreides. The choices she made shaped an empire, but first the Lady of Caladan must reckon with her own betrayal of the Bene Gesserit. She has already betrayed her ancient order, but now she must decide if her loyalty to the Sisterhood is more important than the love of her own family.

Meanwhile, events in the greater empire are accelerating beyond the control of even the Reverend Mother, and Lady Jessica's family is on a collision course with destiny.

Brian Herbert, son of Frank Herbert, wrote the definitive biography of his father, Dreamer of Dune, which was a Hugo Award finalist. Brian is president of the company managing the legacy of Frank Herbert and is an executive producer of the motion picture Dune, as well as of the TV series Dune: The Sisterhood. He is the author or coauthor of more than forty-five books, including multiple New York Times bestsellers, has been nominated for the Nebula Award, and is always working on several projects at once. He and his wife, Jan, have traveled to all seven continents, and in 2019, they took a trip to Budapest to observe the filming of Dune.

Kevin J. Anderson has written dozens of national bestsellers and has been nominated for the Hugo Award, the Nebula Award, the Bram Stoker Award, and the SFX Readers' Choice Award. His critically acclaimed original novels include the ambitious space opera series The Saga of Seven Suns, including The Dark Between the Stars, as well as Wake the Dragon epic fantasy trilogy, the Terra Incognita fantasy epic with its two accompanying rock CDs. He also set the Guinness-certified world record for the largest single-author book signing, and was recently inducted into the Colorado Authors’ Hall of Fame.

“Characters and plot are thus beautifully set up, the timing is precise...the universe...is so vast, complex and fascinating that the magic lingers.” —Kirkus Reviews on Sisterhood of Dune

“Delivers solid action and will certainly satisfy.” —Booklist on The Winds of Dune

“Fans of the original Dune series will love seeing familiar characters, and the narrative voice smoothly evokes the elder Herbert's style.” —Publishers Weekly on The Winds of Dune

“This sequel to Paul of Dune is an important addition to the Dune chronology and will be in demand by Herbert fans.” —Library Journal, starred review, on The Winds of Dune