True Raiders: The Untold Story of the 1909 Expedition to Find the Legendary Ark of the Covenant (Paperback) 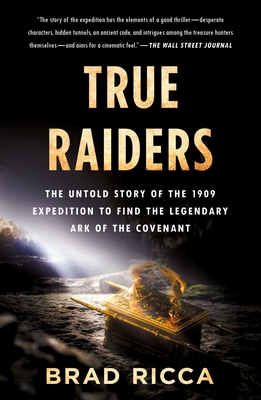 True Raiders: The Untold Story of the 1909 Expedition to Find the Legendary Ark of the Covenant (Paperback)

This book tells the untold true story of Monty Parker, a British rogue nobleman who, after being dared to do so by Ava Astor, the so-called “most beautiful woman in the world,” headed a secret 1909 expedition to find the fabled Ark of the Covenant. Like a real-life version of Raiders of the Lost Ark, this incredible story of adventure and mystery has almost been completely forgotten today.

In 1908, Monty is approached by a strange Finnish scholar named Valter Juvelius who claims to have discovered a secret code in the Bible that reveals the location of the Ark. Monty assembles a ragtag group of blueblood adventurers, a renowned psychic, and a Franciscan father, to engage in a secret excavation just outside the city walls of Jerusalem.

Using recently uncovered records from the original expedition and several newly translated sources, True Raiders is the first retelling of this group’s adventures– in the space between fact and faith, science and romance.

BRAD RICCA earned his Ph.D. in English from Case Western Reserve University where he currently teaches. The author of Super Boys, he has spoken on comics at various schools and museums, and he has been interviewed about comics topics by The New York Daily News, The Wall Street Journal, and All Things Considered on NPR. His film Last Son won a 2010 Silver Ace Award at the Las Vegas International Film Festival. He lives in Cleveland, Ohio.

“Grounded in historical accuracy, this marvelous story of the true raider of the Ark of the Covenant is fascinating, vivid and suggestive as gold lit by torchlight.” —Eric Zala, Director of Raiders of the Lost Ark: The Adaptation, the legendary shot-for-shot remake of the original film.

"True Raiders proves that the best stories are often the true ones. Filled with a compelling cast of characters, Brad Ricca’s book unfolds like the best adventure novels. Prodigiously researched, it’s a rollicking, riveting ride and a fascinating read."
—Buddy Levy, Bestselling Author of Labyrinth of Ice, Conquistador and River of Darkness

"Such a fun read.... Ricca manages to keep readers hooked with this true story that reads like a novel. It leaves readers wondering just how close the explorers get to finding this long-lost piece of history and just how far they’re willing to go to search for it." —Associated Press

"Brad Ricca tops all his previous work with this page turner about the actual search for the Ark of the Covenant." —San Francisco Book Review

"The story of the expedition has the elements of a good thriller—desperate characters, hidden tunnels, an ancient code, and intrigues among the treasure hunters themselves—and aims for a cinematic feel." —Wall Street Journal