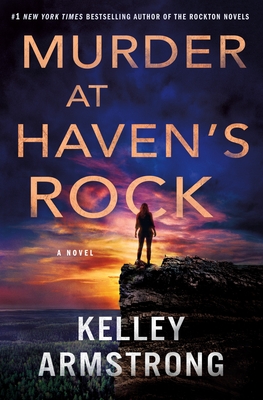 This is book number 8 in the Casey Duncan Novels series.

New York Times bestselling author Kelley Armstrong’s Rockton Novels had one of the most unique towns in crime fiction. Murder at Haven's Rock is a spinoff, a fresh start... with a few new dangers that threaten everything before it even begins.

Deep in the Yukon wilderness, a town is being built. A place for people to disappear, a fresh start from a life on the run. Haven’s Rock isn’t the first town of this kind, something detective Casey Duncan and her husband, Sheriff Eric Dalton, know first hand. They met in the original town of Rockton. But greed and deception led the couple to financing a new refuge for those in need. This time around, they get to decide which applicants are approved for residency.

There’s only one rule in Haven’s Rock: stay out of the forest. When two of the town's construction crew members break it and go missing, Casey and Eric are called in ahead of schedule to track them down. When a body is discovered, well hidden with evidence of foul play, Casey and Eric must find out what happened to the dead woman, and locate the still missing man. The woman stumbled upon something she wasn’t supposed to see, and the longer Casey and Eric don’t know what happened, the more danger everyone is in.

Praise for The Rockton Novels

“Kelley Armstrong’s solid Casey Duncan Series… is turning into one of the best new finds of the decade . . . Slick plotting and good characters are hallmarks of this clever series." — The Globe and Mail

“Kelley Armstrong is incredible at writing atmosphere, and it’s on full display in her Casey Duncan series.” — Bustle

“This is a series that covers all the bases.” —St. Louis Post Dispatch