Until Justice Be Done: America's First Civil Rights Movement, from the Revolution to Reconstruction (Paperback) 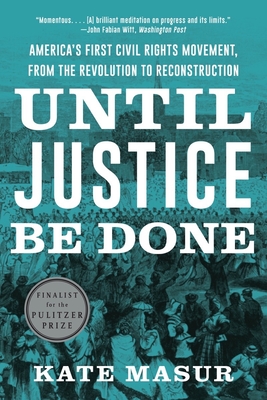 Until Justice Be Done: America's First Civil Rights Movement, from the Revolution to Reconstruction (Paperback)

Finalist for the 2022 Pulitzer Prize in History

Finalist for the 2022 Lincoln Prize

A groundbreaking history of the movement for equal rights that courageously battled racist laws and institutions, Northern and Southern, in the decades before the Civil War.

The half-century before the Civil War was beset with conflict over equality as well as freedom. Beginning in 1803, many free states enacted laws that discouraged free African Americans from settling within their boundaries and restricted their rights to testify in court, move freely from place to place, work, vote, and attend public school. But over time, African American activists and their white allies, often facing mob violence, courageously built a movement to fight these racist laws. They countered the states’ insistences that states were merely trying to maintain the domestic peace with the equal-rights promises they found in the Declaration of Independence and the Constitution. They were pastors, editors, lawyers, politicians, ship captains, and countless ordinary men and women, and they fought in the press, the courts, the state legislatures, and Congress, through petitioning, lobbying, party politics, and elections. Long stymied by hostile white majorities and unfavorable court decisions, the movement’s ideals became increasingly mainstream in the 1850s, particularly among supporters of the new Republican party. When Congress began rebuilding the nation after the Civil War, Republicans installed this vision of racial equality in the 1866 Civil Rights Act and the Fourteenth Amendment. These were the landmark achievements of the first civil rights movement.

Kate Masur’s magisterial history delivers this pathbreaking movement in vivid detail. Activists such as John Jones, a free Black tailor from North Carolina whose opposition to the Illinois “black laws” helped make the case for racial equality, demonstrate the indispensable role of African Americans in shaping the American ideal of equality before the law. Without enforcement, promises of legal equality were not enough. But the antebellum movement laid the foundation for a racial justice tradition that remains vital to this day.

Kate Masur is professor of history at Northwestern University. A finalist for the Lincoln Prize, she is author and editor of acclaimed books on the Civil War and Reconstruction. She lives in Evanston, Illinois.
A remarkable and shattering book….Breathtakingly fresh.
— Harold Holzer - Wall Street Journal

Revelatory….excellent….If this is a clear-eyed book, it’s still a heartening one.
— Jennifer Szalai - New York Times

At a time when definitions of citizenship and civil rights are again under assault, Masur's careful accounting of the ways Americans came to understand such terms provides an informed perspective to appreciate that such concepts never were, and thus never are, self-evident. They require due diligence and vigilance to secure and sustain at all levels of government. An essential book.
— Library Journal (starred review)

Kate Masur’s masterpiece is an extraordinary contribution to our understanding of the central role of African Americans in conceiving American democracy.
— Keeanga-Yamahtta Taylor, author of Race for Profit

In this brilliant book, Kate Masur widens and deepens our understanding of the long struggle against racism throughout the United States.
— Alan Taylor, author of Thomas Jefferson’s Education

Kate Masur’s Until Justice Be Done is a masterpiece of scope, insight, and graceful writing about the central question in the making, unmaking, and remaking of an American democracy. This is a book we will read and conjure with for a long time.

A tour de force: Until Justice Be Done is the eloquent and essential story of what the first civil rights movement achieved, and what it left for later generations to do.

A magnificent contribution to the history of antiracism in America.
— Randall Kennedy, author of For Discrimination

Until Justice Be Done tells the origin story of one of the most important and often-misunderstood ideas in American law and politics: racial equality before the law. It is a brilliant book.

— Dylan C. Penningroth, author of The Claims of Kinfolk

In our current moment, as we imagine paths forward for American democracy, Kate Masur’s revelatory book is essential reading.
— Daniel J. Sharfstein, author of Thunder in the Mountains

Kate Masur’s sobering and inspiring history of the ‘first civil rights movement’ could not be more timely.
— Steven Hahn, author of A Nation Under Our Feet

[I]lluminating history…This engrossing study goes beyond sectionalist accounts of the South's peculiar institution to show how racism and civil rights activism have shaped every corner of America.
— Publishers Weekly

A fine history of the first phase of the nation’s most enduring moral reform effort.
— Kirkus Reviews