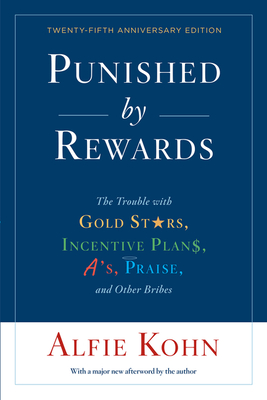 
Usually Ships in 1-5 Days
Revised for the twenty-fifth anniversary of its publication, Alfie Kohn's landmark challenge to carrot-and-stick psychology features updated reflections and research in a major new afterword by the author.

Our basic strategy for raising children, teaching students, and managing workers can be summed up in six words: Do this and you’ll get that. We dangle goodies (from candy bars to sales commissions) in front of people in the same way that we train the family pet.

Since its publication in 1993, this groundbreaking book has persuaded countless parents, teachers, and managers that attempts to manipulate people with incentives may seem to work in the short run, but they ultimately fail and even do lasting harm. Drawing from hundreds of studies, Kohn demonstrates that we actually do inferior work when we are enticed with money, grades, or other incentives—and are apt to lose interest in whatever we were bribed to do.

Promising goodies to children for good behavior, meanwhile, can never produce anything more than temporary obedience. Even praise can become a verbal bribe that gets kids hooked on our approval.

Rewards and punishments are two sides of the same coin—and the coin doesn’t buy much. What is needed, Kohn explains, is an alternative to both ways of controlling people. Hence, he offers practical strategies for parents, teachers, and managers to replace carrots and sticks.

Seasoned with humor and familiar examples, Punished by Rewards presents an argument that is unsettling to hear but impossible to dismiss.
ALFIE KOHN's published works include Punished by Rewards, No Contest: The Case Against Competition, Beyond Discipline, and What to Look for in a Classroom. Described by Time as "perhaps the country's most outspoken critic of educational fixation on grades and test scores," he has traveled across the country delivering lectures to teachers, parents, and researchers.

"a clear, convincing demonstration of the shortcomings of pop-behaviorism, written with style, humor, and authority," Kirkus Reviews

"Every parent, teacher, and manager should read this book -- and hurry." -- Thomas Gordon, founder of Parent Effectiveness Training —