Conquering The Pacific: An Unknown Mariner and the Final Great Voyage of the Age of Discovery (Hardcover) 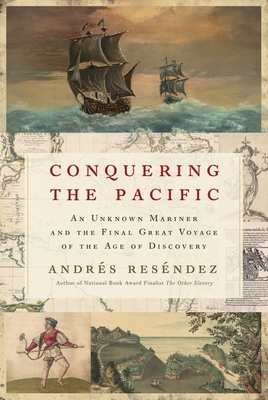 Conquering The Pacific: An Unknown Mariner and the Final Great Voyage of the Age of Discovery (Hardcover)

It began with a secret mission, no expenses spared. Spain, plotting to break Portugal’s monopoly trade with the fabled Orient, set sail from a hidden Mexican port to cross the Pacific—and then, critically, to attempt the never-before-accomplished return, the vuelta. Four ships set out from Navidad, each one carrying a dream team of navigators. The smallest ship, guided by seaman Lope Martín, a mulatto who had risen through the ranks to become one of the most qualified pilots of the era, soon pulled far ahead and became mysteriously lost from the fleet. It was the beginning of a voyage of epic scope, featuring mutiny, murderous encounters with Pacific islanders, astonishing physical hardships—and at last a triumphant return to the New World. But the pilot of the fleet’s flagship, the Augustine friar mariner Andrés de Urdaneta, later caught up with Martín to achieve the vuelta as well. It was he who now basked in glory, while Lope Martín was secretly sentenced to be hanged by the Spanish crown as repayment for his services. Acclaimed historian Andrés Reséndez, through brilliant scholarship and riveting storytelling—including an astonishing outcome for the resilient Lope Martín--sets the record straight.

ANDRÉS RESÉNDEZ’s most recent book, The Other Slavery: The Uncovered Story of Indian Enslavement in America, was a finalist for the National Book Award and the winner of the 2017 Bancroft Prize. He is a professor of history at the University of California, Davis, a current Carnegie fellow, and an avid sailor.

“A pacey account [of] a triumph of seamanship over wind and water. And credit for it, Mr. Reséndez shows persuasively, rests with a brilliant pilot whose role has long been neglected.” — Wall Street Journal

“Riveting...Enlivened by lucid explanations of navigational techniques, larger-than-life characters, and colorful anecdotes from the age of exploration, this is a rip-roaring maritime adventure.”  — Publishers Weekly (starred review)

“[Reséndez] makes the details fascinating and compelling. Readers of sailing and adventure stories will find this true account both enlightening and exciting.” — Booklist (starred review)

“Andrés Reséndez’s Conquering the Pacific is a masterwork of narrative and conception. Reséndez magically transforms dogged archival research into a sweeping vision of the past, capturing the grandest of epochs—of sail, of discovery, of conquest, of slavery and the beginning of globalization—in the thrilling life of a heretofore anonymous master and commander.  A riveting tour-de-force.” — Greg Grandin, Pultizer Prize-winning author of The End of the Myth and Empire's Workshop

“At once learned and lively, Conquering the Pacific is a remarkable journey of discovery. Conquering the Pacific has it all: a covert mission, mutiny and swordplay on the high seas, and a dynamic lead role in Lope Martín, the courageous and heroic Afro-Portuguese navigator. The crisp narrative whirls like a gyre, transporting readers to previously unknown seas and shores. A vital, captivating read.”  — Buddy Levy, author of Labyrinth of Ice

“A historian, sailor, and master storyteller, Andrés Reséndez pilots us brilliantly through the intricacies of long-distance Pacific navigation during the last decades of the Age of Discovery. His mesmerizing account of momentous deep-water voyages involving weeks out of sight of land is a masterpiece of detailed historical inquiry and writing. I couldn’t put it down.” — Brian Fagan, author of The Little Ice Age and Beyond the Blue Horizon

“[A] taut reconstruction of the first recorded west-to-east crossing of the Pacific.” — New Yorker