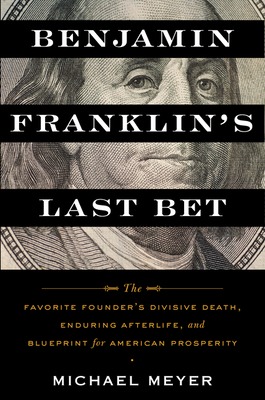 Benjamin Franklin was the ultimate Renaissance man—inventor, statesman, populist, writer. Few of us knew of his legacy to the tradesmen of Boston and Philadelphia that survives today. Fulbright and Guggenheim scholar Mayer delved into this deathbed gift, established to be lent to tradesmen over the next two centuries, intended to support the “leather apron” class. Designed to jump start careers, the loans are repaid with interest over ten years, perpetuating the initial nest egg many times over! Meyer salts the story of these amazing with tantalizing tidbits and little-known facts about Franklin that make his book so much more than another Benjamin Franklin biography. I loved it! ~Susan

The incredible story of Benjamin Franklin’s parting gift to the working-class people of Boston and Philadelphia—a deathbed wager that captures the Founder’s American Dream and his lessons for our current, conflicted age.

Benjamin Franklin was not a gambling man. But at the end of his illustrious life, the Founder allowed himself a final wager on the survival of the United States: a gift of two thousand pounds to Boston and Philadelphia, to be lent out to tradesmen over the next two centuries to jump-start their careers. Each loan would be repaid with interest over ten years. If all went according to Franklin’s inventive scheme, the accrued final payout in 1991 would be a windfall.

In Benjamin Franklin’s Last Bet, Michael Meyer traces the evolution of these twin funds as they age alongside America itself, bankrolling woodworkers and silversmiths, trade schools and space races. Over time, Franklin’s wager was misused, neglected, and contested—but never wholly extinguished. With charm and inquisitive flair, Meyer shows how Franklin’s stake in the “leather-apron” class remains in play to this day, and offers an inspiring blueprint for prosperity in our modern era of growing wealth disparity and social divisions.

MICHAEL MEYER is the author of three critically acclaimed books, as well as articles in the New York Times and other outlets. A Fulbright scholar, Guggenheim, NEH, Cullman Center and MacDowell fellow, and the recipient of the Whiting Writers Award, Meyer is a Professor of English at the University of Pittsburgh, where he teaches nonfiction writing. He lives in Pittsburgh.

“An engrossing look at a lesser-known aspect of Benjamin Franklin's legacy . . . Enriched by vivid character sketches and lucid explanations of financial and policy matters, this is an entertaining examination of how a wise investment pays off.” — Publishers Weekly (starred review)

“If anyone had told me you could find something genuinely new about one of the founding fathers, I wouldn’t have believed it. But Michael Meyer’s extraordinary tale of this amazingly foresighted project of Ben Franklin’s proves me wrong—and makes for lively and fascinating reading.”
— Adam Hochschild, New York Times bestselling author

“A portrait of the great revolutionary leader as a working-class populist… Meyer’s book sheds fascinating light on an icon who has been reduced to a symbol.” — Kirkus Reviews

"Throughout this narrative of the checkered conformance to Franklin's intention, Meyer wryly injects apt adages from Franklin's Poor Richard's Almanack into his own lively prose. A unique and entrancing investigation." — Booklist

"[Benjamin Franklin’s Last Bet] provides a glorious wealth of information on Franklin’s family life, work, dedication to the common man, and determination to see the great American experiment in which he was so intimately involved grow and thrive." — Philadelphia Magazine

"Michael Meyer’s marvelous book has it all: life, death, love, money, generosity, and greed, not to mention the seeds of microfinance, the miracle of compound interest, and the important lesson that an idealistic vision, even if imperfectly executed, can change lives."
— Anne Fadiman, National Book Critics Circle Award–winning author of The Spirit Catches You and You Fall Down

“From the first page, Michael Meyer's storytelling talent grips you and doesn’t let go. Benjamin Franklin's Last Bet is a surprising and important read that follows the financial and cultural ripples caused by the founding father's death, from the surprising revelations that appear in his will right up to the present day. Full of rich detail and deftly-rendered twists and turns, this is a superb read that will make you see Franklin, and our American culture today, in an entirely new light.”
— A.J. Baime, New York Times best-selling author of White Lies and The Accidental President

“Deeply researched and beautifully written, Benjamin Franklin’s Last Bet is also utterly original: the history of a great man’s legal and philanthropic afterlife. By beginning at the end—Franklin’s death, and his unusual will—Meyer embarks on a tale that reveals both the origins of American philanthropy and its trajectory over more than two centuries.”
— Peter Hessler, New York Times best-selling author of Oracle Bones, finalist for the National Book Award

“Benjamin Franklin gave more than his thoughts to the future of the young republic he helped establish. As Michael Meyer explains in this illuminating account, the founder also bequeathed an enduring financial endowment to his beloved ‘leather apron’ men—the working people of Boston, Philadelphia, and America. Benjamin Franklin’s Last Bet is a welcome and timely addition to our understanding of Franklin’s age, as well as our own.”
— Philip Dray, finalist for the Pulitzer Prize and author of Stealing God’s Thunder: Benjamin Franklin’s Lightning Rod and the Invention of America

“Benjamin Franklin’s Last Bet is the charming, wide-ranging tale of Franklin’s dying bequest to the tradesmen of Boston and Philadelphia and its abiding legacy. Meyer is a brilliant guide, unwinding for us the many threads that link this founding father to a modern-day America he would barely have recognized.”
— Stephen R. Platt, author of Imperial Twilight, finalist for the Baillie Gifford Prize for Nonfiction

“What Meyer has done is remarkable: find an aspect of Franklin’s life that has not been written about to death… A lively and engrossing narrative of how a person known for so many other things can make a mark by also being a philanthropist. Tech titans, take note.”
— Air Mail