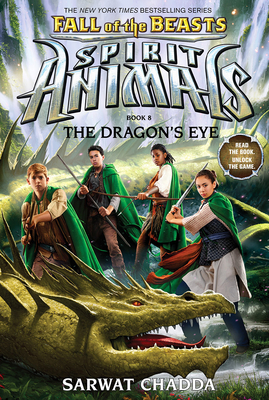 
Usually Ships in 1-5 Days
The four heroes of Erdas are fugitives on the run in this final chapter of the New York Times bestselling series!Conor, Abeke, Meilin, and Rollan are prisoners. Framed for a crime they didn't commit, the four young Greencloaks have been captured by the ruthless Oathbound.Rather than facing trial with the rest of their order, the friends and their spirit animals find themselves smuggled to a remote palace. There they discover that the plot against them runs deeper -- and is far more sinister -- than anyone realized. Someone has been manipulating both the Greencloaks and Erdas's leaders, all to uncover a powerful relic with the potential to flood the entire world.To stop this conspiracy, the Heroes of Erdas will need absolute faith in their spirit animals. If they fail, all of Erdas will drown.
Sarwat Chadda is the author of the YA novels DEVIL'S KISS and DARK GODDESS. A former engineer, he is very glad to now be constructing stories and not ductwork systems. He lives in London, England, with his family. Visit him on the web at www.sarwatchadda.com and @sarwatchadda.