Once Upon a Time in Queens: An Oral History of the 1986 Mets (Hardcover) 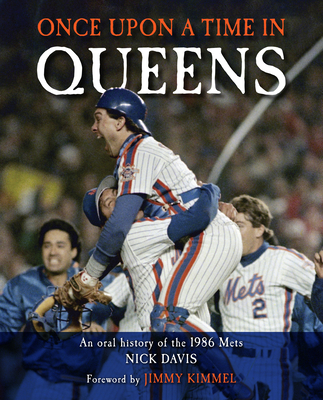 Once Upon a Time in Queens: An Oral History of the 1986 Mets (Hardcover)

A four-color celebration of the New York Mets’ iconic World Series championship, with oral history-style text throughout and a new foreword by Jimmy Kimmel.

In 2021, ESPN aired “Once Upon a Time in Queens,” a four-part documentary from their 30 for 30 series. Produced by ESPN Films, Jimmy Kimmel, Cousin Sal Iacono, and Major League Baseball and directed by Nick Davis, the docuseries was a huge hit and featured never-before-seen footage, as well as remembrances from almost all of the key players. This tie-in book is an oral history with new contributions from Keith Hernandez, Darryl Strawberry, Dwight Gooden, Lenny Dykstra, and many others. Also included are unique photographs of the team and the era. A foreword by Kimmel, discussing what the Mets and their triumph means to him, rounds out this fantastic package.

The perfect gift for baseball fans and New Yorkers alike!
NICK DAVIS is a writer, director, and producer. He lives in New York City.