Buddha or Bust: In Search of Truth, Meaning, Happiness, and the Man Who Found Them All (Paperback) 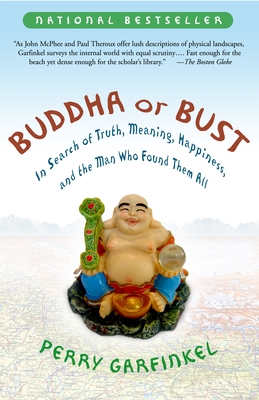 Buddha or Bust: In Search of Truth, Meaning, Happiness, and the Man Who Found Them All (Paperback)


Backordered
Why does an idea that’s 2,500 years old seem more relevant today than ever before? How can the Buddha’s teachings help us solve many of the world’s problems? Journalist Perry Garfinkel circumnavigated the globe to discover the heart of Buddhism and the reasons for its growing popularity—and ended up discovering himself in the process.

The assignment from National Geographic couldn’t have come at a better time for Garfinkel. Burned out, laid up with back problems, disillusioned by relationships and religion itself, he was still hoping for that big journalistic break—and the answers to life’s biggest riddles as well. So he set out on a geographic, historical and personal expedition that would lead him around the world in search of those answers, and then some.

First, to better understand the man who was born Prince Siddhartha Gautama, he followed the time-honored pilgrimage “in the footsteps of the Buddha” in India. From there, he tracked the historical course of Buddhism: to Sri Lanka, Thailand, China, Tibet, Japan and on to San Francisco and Europe. He found that the Buddha’s teachings have spawned a worldwide movement of “engaged Buddhism,” the application of Buddhist principles to resolve social, environmental, health, political and other contemporary problems. From East to West and back to the East again, this movement has caused a Buddhism Boom.

Along the way he met a diverse array of Buddhist practitioners—Thai artists, Indian nuns, Sri Lankan school children, Zen archers in Japan, kung fu monks in China and the world’s first Buddhist comic (only in America). Among dozens of Buddhist scholars and leaders, Garfinkel interviewed His Holiness the Dalai Lama, an experience that left him speechless—almost. As just reward for his efforts, toward the end of his journey Garfinkel fell in love in the south of France at the retreat center of a leader of the engaged movement, the Vietnamese Buddhist monk Thich Nhat Hanh—a romance that taught him as much about Buddhism as all the masters combined.

In this original, entertaining book, Garfinkel separates Buddhist fact from fiction, sharing his humorous insights and keen perceptions about everything from spiritual tourism to Asian traffic jams to the endless road to enlightenment.
Perry Garfinkel has been a contributor to the New York Times since 1986, specializing in travel and cultural trends. A veteran journalist who has covered the overlap of East and West for more than thirty years for many major publications, he has been falling on and off the meditation cushion for just as long. He lives on Martha’s Vineyard. Visit him at BuddhaOrBust.com
“A compelling read . . . part travelogue, part primer, part spiritual quest. Garfinkel brings a reporter’s sharp eyes to an elusive topic.” —Tony Horwitz, author of Blue Latitudes and Confederates in the Attic

“Narrating his observations of contemporary Buddhist practice and meetings with Buddhists in situations that include traditional Buddhist strongholds and places in the West, where the Dharma has only recently arrived, Perry Garfinkel presents Buddhism as a practical approach to human problems. The Buddha’s teaching remains refreshing and relevant today, because, more than two and a half thousand years ago, he invited people to listen, reflect and critically examine what he had to say in the context of their own lives.” —His Holiness the Dalai Lama

“Garfinkel dramatically demonstrates that the socially engaged Buddhism movement is growing globally and touching millions of minds and hearts—including his own.” —Thich Nhat Hanh

“Garfinkel’s global search for the essence of Buddhism today is in turn entertaining, informative and enlightening. As a raconteur of the Dharma, Garfinkel is as lively a guide as anyone could hope for on such a pilgrimage—Woody Allen in the footsteps of the Buddha.” —Daniel Goleman, author of Emotional Intelligence