The History of the World in Fifty Dogs (Hardcover) 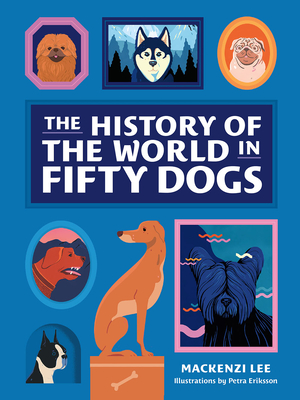 The History of the World in Fifty Dogs (Hardcover)


Usually Ships in 1-5 Days
An illustrated collection of stories about dogs that knew how to sit, stay, and witness history

Most dog lovers know Fido and Laika, but how about Martha, Paul McCartney's Old English Sheepdog? Or Peritas, Alexander the Great’s trusted canine companion? As long as there have been humans, those humans have had beloved companions—their dogs. From the ancient Egyptians mummifying their pups, to the Indian legend of the king who refused to enter the afterlife unless his dog was allowed there too, to the modern meme and popularity of terms like the corgi sploot, humans are undeniably obsessed with their dogs. Told in short, illustrated essays that are interspersed with both historical and canine factoids, The History of the World in Fifty Dogs brings to life some of history’s most memorable moments through the stories of the dogs that saw them happen.

Mackenzi Lee holds a BA in history and an MFA in writing for children and young adults from Simmons College. She is the New York Times bestselling author of The Gentleman’s Guide to Vice and Virtue, which was awarded a 2018 Stonewall Book Award Honor. She is also the author of Bygone Badass Broads: 52 Women Who Changed to World. Lee currently works at an independent bookstore in Salt Lake City.