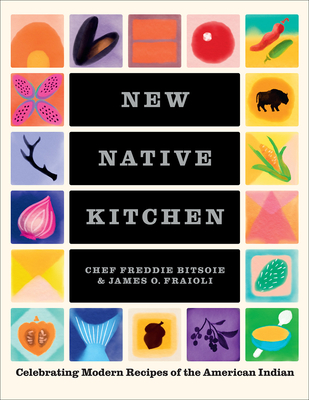 From Freddie Bitsoie, the former executive chef at Mitsitam Native Foods Café at the Smithsonian’s National Museum of the American Indian, and James Beard Award–winning author James O. Fraioli, New Native Kitchen is a celebration of Indigenous cuisine. Accompanied by original artwork by Gabriella Trujillo and offering delicious dishes like Cherrystone Clam Soup from the Northeastern Wampanoag and Spice-Rubbed Pork Tenderloin from the Pueblo peoples, Bitsoie showcases the variety of flavor and culinary history on offer from coast to coast, providing modern interpretations of 100 recipes that have long fed this country.

Recipes like Chocolate Bison Chili, Prickly Pear Sweet Pork Chops, and Sumac Seared Trout with Onion and Bacon Sauce combine the old with the new, holding fast to traditions while also experimenting with modern methods. In this essential cookbook, Bitsoie shares his expertise and culinary insights into Native American cooking and suggests new approaches for every home cook. With recipes as varied as the peoples that inspired them, New Native Kitchen celebrates the Indigenous heritage of American cuisine.
Freddie Bitsoie is a proud Navajo and an award-winning chef. He is the former executive chef of Mitsitam Native Foods Café, located inside Washington, D.C.’s Smithsonian National Museum of the American Indian. Bitsoie was previously the executive chef of Fire Rock Casino and is the winner of the Smithsonian’s Native Chef Competition. He has contributed to a number of Native American cookbooks, including America: The Cookbook (Phaidon, 2017) and James Beard Award–winner Sioux Chef's Indigenous Kitchen (University of Minnesota Press, 2017). He lives in Washington, D.C.
“This book is a glorious celebration of Native American cuisine filled with pride and love.”

“Thanks to Chef Freddie Bitsoie and this artful, inspiring book, it is easy to see how we can incorporate Indigenous foods into our kitchens and how the simple act of cooking can also be a celebration of Indigenous people, their rich cultural traditions, and connection to the land that has inspired so many delicious recipes.”

“Freddie Bitsoie is one of our continent’s very best chefs and storytellers. This is required reading for anyone who really cares about cooking.”

“I am fascinated with Freddie’s knowledge of Indigenous foods. He always brings love and understanding to the experience of ancestral food culture. Meegwetch (thank you).”

“I have always used food as my entry point to learning more about cultures both outside of and within my own—and in New Native Kitchen, Freddie Bitsoie is an exceptional guide, showing off the vibrant, regional native cooking of what is now the United States, giving context to the people who created it while showing off the beautiful ingredients of a truly exciting and diverse cuisine.”

“I love this book, which is both a practical, modern cookbook filled with recipes that center on the local and the seasonal, and a generous, sweeping testament to the scope, ingenuity, and enduring importance of Indigenous culinary traditions throughout the Americas.”

“To seek and understand Indigenous foods is to dwell in the lands of our ancestors, to taste the earth and all that grows, from roots to leaf, from field and stream, to even the birds of the sky. Freddie not only has been immersed in this knowledge but has been a true, joyous steward of Native culture through food. This is going to be a staple in my house and will be a great gift for friends, family, and colleagues! I love Freddie!”