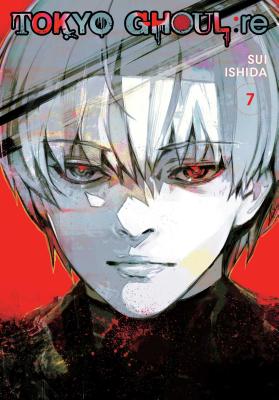 This is book number 7 in the Tokyo Ghoul: re series.

Sen Takatsuki’s newest novel has hit the stands and a video of her admitting to being a Ghoul has gone viral! And if that news hasn’t done enough to shake things up, the contents of her book are sowing civilian distrust of the CCG. How can investigators effectively take on the Ghoul threat if the public has lost faith in them? And what if Sen Takatsuki’s veiled accusations about the CCG brass are true…?
Sui Ishida was born in Fukuoka, Japan. He is the author of Tokyo Ghoul and several Tokyo Ghoul one-shots, including one that won him second place in the Weekly Young Jump 113th Grand Prix award in 2010. Tokyo Ghoul began serialization in Weekly Young Jump in 2011 and was adapted into an anime series in 2014.