Niagara: A History of the Falls (Excelsior Editions) (Paperback) 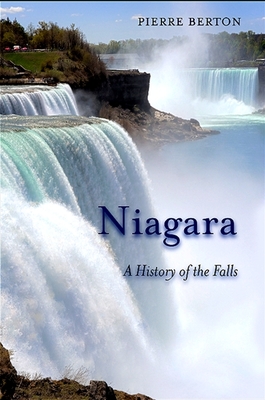 Niagara: A History of the Falls (Excelsior Editions) (Paperback)


Email or call for price
"The noble cataract reflects the concerns, failings, and fancies of the times. If we gaze deeply into its shimmering image we can perhaps discern our own." - page 22 " Pierre Berton] makes a serious and convincing case for Niagara's pivotal role in North American history. ... His Niagara is a lodestar for North American culture and invention: site of the first railway suspension bridge, inspiration for Nikola Tesla's discovery of the principle of alternating current, and the subject of Frederic Church's most celebrated landscape; a natural wonder that has bewitched generations of scientists, authors, and utopians, and stimulated innovations and social movements still casting long shadows. ... surprising, rich and engrossing." -- Thurston Clarke, New York Times Book Review "Canadian historian Berton tells dozens of absorbing tales about the region and those who passed through it ... He tells them all superbly, aided by essential maps and a few reproductions of posters advertising some of the more bizarre stunts." -- Publishers Weekly "Entertaining. . . . Berton brings to life the adventurers and dreamers, visionaries and industrialists, who over centuries have been drawn to the Falls." -- Maclean's "Berton at his storytelling best; there is something here for everyone. ... a vintage, full-bodied read." -- The London Free Press "A book worth diving into." -- Calgary Herald "By turns ironic, amused, shocked, horrified and awestruck, Berton traces Niagara's history through the deeds of those who came in contact with it ... all the while walking the fine line between detachment and emotion with agility and grace." -- The Whig-Standard (Kingston) Pierre Berton was one of Canada's most popular and prolific authors, and is widely credited with popularizing Canadian history. His previous books include The Wild Frontier, Prisoners of the North, Klondike, The Invasion of Canada, and The Great Depression.