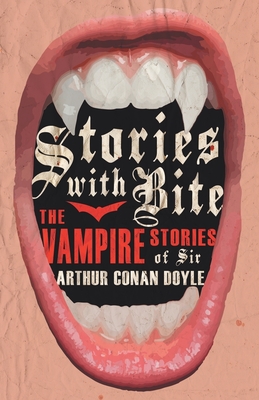 
Usually Ships in 1-5 Days
A collection of Arthur Conan Doyle's chilling vampire stories, including: "The American's Tale", "The Captain of the Pole-star", "John Barrington Cowles", "The Ring of Thoth", "The Winning Shot", and "The Parasite". Blood-curdling stories of lust, loathing and decadence, they explore the darker side of the human psyche, both living and unliving. "Stories with Bite" is highly recommended for lovers of Gothic literature and is not to be missed by fans of vampire stories in particular. Sir Arthur Ignatius Conan Doyle (1859 - 1930) was a British writer best known for his detective novels starring the now world-famous character Sherlock Holmes. He published the first novel concerning Holmes and Dr. Watson "A Study in Scarlet" in 1887, and went on to produce more than fifty others featuring the legendary crime-fighting duo. He was a prolific author, writing in many genres over his lifetime including science fiction, comedy, poetry, romance, historical, non-fiction, and fantasy. Many vintage books such as this are increasingly scarce and expensive. It is with this in mind that we are republishing this volume now in an affordable, modern, high-quality edition complete with the original text and artwork.