Murder Your Employer: The McMasters Guide to Homicide (Hardcover) 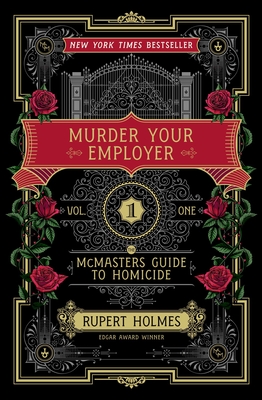 Murder Your Employer: The McMasters Guide to Homicide (Hardcover)


Coming Soon - Available for Pre-Order Now
From the diabolical imagination of Edgar Award–winning novelist, playwright, and story-songwriter Rupert Holmes comes a devilish thriller with a killer concept: The McMasters Conservatory for the Applied Arts, a luxurious, clandestine college dedicated to the fine art of murder where earnest students study how best to “delete” their most deserving victim.

Who hasn’t wondered for a split second what the world would be like if a person who is the object of your affliction ceased to exist? But then you’ve probably never heard of The McMasters Conservatory, dedicated to the consummate execution of the homicidal arts. To gain admission, a student must have an ethical reason for erasing someone who deeply deserves a fate no worse (nor better) than death. The campus of this “Poison Ivy League” college—its location unknown to even those who study there—is where you might find yourself the practice target of a classmate…and where one’s mandatory graduation thesis is getting away with the perfect murder of someone whose death will make the world a much better place to live.

Prepare for an education you’ll never forget. A delightful mix of witty wordplay, breathtaking twists and genuine intrigue, Murder Your Employer will gain you admission into a wholly original world, cocooned within the most entertaining book about well-intentioned would-be murderers you’ll ever read.

Rupert Holmes’s much celebrated career ranges from chart-topping story songs with surprising twists—“Escape (The Pina Colada Song)”—to Tony Award–winning whodunit musicals—The Mystery of Edwin Drood—Edgar Award–winning comedy-thrillers—Accomplice—and the Nero Wolfe Best American Mystery Novel nominated Where the Truth Lies, made into an Atom Egoyan motion picture starring Colin Firth and Kevin Bacon. Called “an American treasure” (Los Angeles Times), “a true Renaissance man” by Newsweek, “a comic genius” (Kirkus Reviews) and simply “a genius” (The Times, London), Rupert Holmes brings his wickedly clever storytelling talents to this outrageous and darkly comic mystery set in a secret, idyllic campus where students learn how to “do in others as you would have others do you in.”
Rupert Holmes has received two Edgar Awards from the Mystery Writers of America, and multiple Tony® and Drama Desk Awards for his Broadway mystery musicals, including the book of Curtains and his sole creation, the Tony® Award–winning Best Musical The Mystery of Edwin Drood. His first novel, Where the Truth Lies, was nominated for a Nero Wolfe award for Best American Mystery Novel, was a Booklist Top Ten Debut Novel, and became a motion picture starring Colin Firth and Kevin Bacon. His second novel, Swing, was the first novel with its own original, clue-bearing musical score. He has adapted Agatha Christie, John Grisham, and R.L. Stine for the Broadway and international stage. His short stories have been anthologized in such collections as Best American Mystery Stories, Christmas at the Mysterious Bookshop, and On a Raven’s Wing. Holmes’s earliest story-songs were published in Ellery Queen’s Mystery Magazine and  he is also the writer/vocalist of several Billboard Top 10 hits, including his Billboard #1 multi-platinum classic with a memorable twist-ending: “Escape (The Pina Colada Song).”
“Holmes is a gifted wordsmith whose latest is a top-notch read that both entertains and amuses. . . . Delightfully wicked . . . An amusing and cheeky tale with excellent pacing replete with droll observations.” —Library Journal (starred review)

“This will be one of the funniest books of the year.” —CrimeReads, “Most Anticipated Crime Fiction of 2023”

“Edgar winner Holmes frames this cheeky 1950s-set crime novel as a self-study guide for those who can’t afford tuition to the McMasters Conservatory for the Applied Arts, a ‘finishing school for finishing people off’ . . . [the] farcical plotting, idiosyncratic characters, and witty, stylish prose combine for a fun, frothy read. Fans of humorous historical fiction will be well entertained.” —Publishers Weekly

“Highly entertaining . . . This clever novel imparts revelations from the clandestine McMasters Conservatory, which provides students of all ages with a well-rounded education on the necessary skills to complete their ‘final thesis’ . . . Warning: readers could die laughing.” —Shelf Awareness

“From the fiendishly funny hand of the Edgar- and Tony-winning Holmes (The Mystery of Edwin Drood) . . . [this] thriller is delightfully dark and compelling. . . . Perfect for readers looking for something very different.” —Booklist

“A case study in the droll amusements of homicide, Rupert Holmes’s send-up of higher education and even higher crimes and misdemeanors will keep you up at night—alternately turning pages and checking to make sure the front door is locked.” —Gregory Maguire, author of Wicked

“With dry humor and an eye for hidden clues, Rupert Holmes imagines a secret Hogwarts-like school that teaches the fine art of pulling off the perfect (and perfectly deserved) murder. An utterly creative and deliciously diabolical read.” —Alafair Burke, New York Times bestselling author of Find Me

“A college with a degree in Homicide? Only Rupert Holmes could make murder laugh-out-loud funny. This book isn't clever—it's fiendishly clever. And the twists and tricks and endless surprises make me want to sign up for another semester!” —R.L. Stine, author of Goosebumps and Fear Street


PRAISE FOR SWING BY RUPERT HOLMES:

“Every tightening of the suspense is beautifully rendered, polished to a sheen.”
—Los Angeles Times Book Review

“Every debut should be so good.”
—Chicago Sun-Times

PRAISE FOR WHERE THE TRUTH LIES:

“Where the Truth Lies is a beguiling suspense novel. It's sexy and surprising, witty and intriguing. I was hooked from the very first page.”
—Candace Bushnell, author of Sex in the City

“Days after you finish this book, you’ll still feel the narrator’s voice elbowing through your brain. Fully realized characters, ruthless commentary, and a beautifully dark sense of humor—all masquerading as a hyper-clever mystery. You won’t look at the truth the same way again.”
—Brad Meltzer, author of The Escape Artist