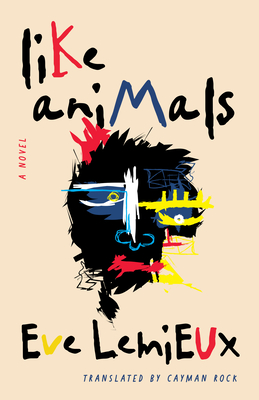 
Usually Ships in 1-5 Days
Too much sex in the city: a young woman goes into a self-destructive spiral after becoming obsessed with a downtown Montreal hipster.

Reality, that speedy bitch, is catching up to me.

In downtown Montreal, everyone is in a band or making a movie. Philomena Flynn and her best friend, Tania, are living fast and hard. There is sex when and where they want it, as well as drugs of all kinds. Not enough work, but lots of parties. Cute boys or nice boys, but rarely both at once. Philomena has no idea how to protect herself from her roaring feelings and goes into a spiral of self-destruction when her heart is broken. Too bad for Tania. Too bad for Philomena's dad. Too bad for boys who are too nice to her, and too bad, above all, for Philomena.

Like Animals is a glimpse into the raucous, sex-filled lives -- infused with self-doubt and euphoria -- of young, creative people who are far more sensitive than their cool facades will admit.

A RARE MACHINES BOOK.
Eve Lemieux is a comedian, actor, and writer. Like Animals is her debut novel, inspired by people who haven't learned to love gently. Eve lives in Montreal.