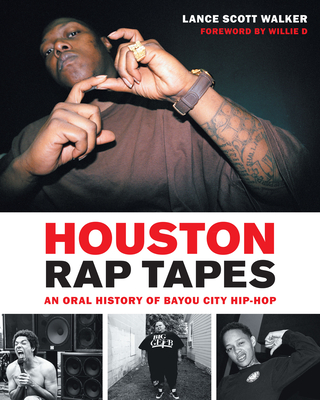 This second edition of Houston Rap Tapes amplifies the city’s hip-hop history through new interviews with Scarface, Slim Thug, Lez Moné, B L A C K I E, Lil’ Keke, and Sire Jukebox of the original Ghetto Boys. Walker groups the interviews into sections that track the different eras and movements in Houston rap, with new photographs and album art that reveal the evolution of the scene from the 1970s to today’s hip-hop generation. The interviews range from the specifics of making music to the passions, regrets, memories, and hopes that give it life. While offering a view from some of Houston’s most marginalized areas, these intimate conversations lay out universal struggles and feelings. As Willie D of Geto Boys writes in the foreword, “Houston Rap Tapes flows more like a bunch of fellows who haven’t seen each other for ages, hanging out on the block reminiscing, rather than a calculated literary guide to Houston’s history.”

Houston Rap Tapes is a book that any self-respecting hip-hop head should read. Through copious amounts of research, care, and empathy, Walker allows the city of Houston to tell its story the way it deems fit.
— Los Angeles Review of Books

One of the best specific explorations of hip-hop you'll ever find.
— San Antonio Current

Houston...is changing. Books like Houston Rap Tapes help put on record the history and creativity that have long bubbled in the city's core neighborhoods.
— D Magazine

Lance Scott Walker…is a historian with a capital H. What I enjoyed most about this book is that great lengths were taken to include participants at all levels of exposure, from mainstream to underground.
— Day and a Dream

The oral histories, drawing on interviews conducted from 2005 to 2017, highlight the connections between the artists and the community they built.
— Publishers Weekly

[Walker's] documentation may be more crucial now than ever.
— Houston Chronicle

For Houston, this book is iconic because local voices break down the models that they embedded in early 'Hustletown' culture that are still alive to this day as underground Texas rappers attempt to adapt to the streaming era.
— Passion of the Weiss

An authoritative history of one of America's most innovative and radical music scenes…[Lance Scott Walker] offers a dream realized for fans of Houston's explosive rap scene.
— Texas Books in Review

[Houston Rap Tapes] is a guide on how to appropriately archive and document regional rap over a generational timeline. It’s gold.
— Taylor Crumpton