The Sports Revolution: How Texas Changed the Culture of American Athletics (The Texas Bookshelf) (Hardcover) 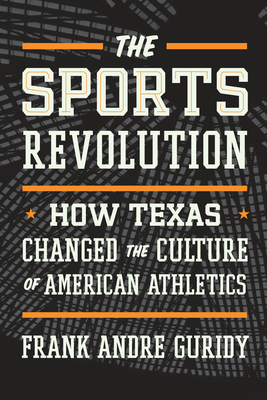 The Sports Revolution: How Texas Changed the Culture of American Athletics (The Texas Bookshelf) (Hardcover)

In the 1960s and 1970s, America experienced a sports revolution. New professional sports franchises and leagues were established, new stadiums were built, football and basketball grew in popularity, and the proliferation of television enabled people across the country to support their favorite teams and athletes from the comfort of their homes. At the same time, the civil rights and feminist movements were reshaping the nation, broadening the boundaries of social and political participation. The Sports Revolution tells how these forces came together in the Lone Star State.

Tracing events from the end of Jim Crow to the 1980s, Frank Guridy chronicles the unlikely alliances that integrated professional and collegiate sports and launched women’s tennis. He explores the new forms of inclusion and exclusion that emerged during the era, including the role the Dallas Cowboys Cheerleaders played in defining womanhood in the age of second-wave feminism. Guridy explains how the sexual revolution, desegregation, and changing demographics played out both on and off the field as he recounts how the Washington Senators became the Texas Rangers and how Mexican American fans and their support for the Spurs fostered a revival of professional basketball in San Antonio. Guridy argues that the catalysts for these changes were undone by the same forces of commercialization that set them in motion and reveals that, for better and for worse, Texas was at the center of America’s expanding political, economic, and emotional investments in sport.

Frank Guridy is an associate professor of history and African American and African diaspora studies at Columbia University. He is the author of the award-winning book Forging Diaspora: Afro-Cubans and African Americans in a World of Empire and Jim Crow and a co-editor of Beyond el Barrio: Everyday Life in Latina/o America. His work has appeared in Radical History Review, Caribbean Studies, Social Text, Cuban Studies, Kalfou, the Journal of Sport History, and Public Books.

[Guridy] has a keen eye for turning and tipping points, and his lucid narrative serves his thesis well. Sports buffs will find Guridy’s explorations rewarding.
— Kirkus

[An] illuminating survey...This is a fascinating and meticulously researched gem for sports buffs.
— Publishers Weekly

A remarkable look at how the intersection of resistance movements and Texas athletics changed the USA forever.
— The Nation's "Edge of Sports"

Guridy makes a case that the Texas sports revolution of the sixties and seventies was every bit as history-making as Jackie Robinson’s impact on baseball and post–World War II America, or the impact on both sports and popular culture of such contemporary athletes as Michael Jordan, Tiger Woods, and Serena Williams...While any work of history is also meant to say something about the present moment, this book feels especially timely.
— Texas Monthly

A fascinating look at the game-changers and trendsetters, on and off the field, who not only made Texas great but helped build the American sports landscape...History is never boring. Sports history is even better. And as you might imagine, Texas sports history is bigger and better. Guridy’s effort is worthy of applause.
— Houston Chronicle

[The Sports Revolution] is a book that looks at the different impacts sports can have: 'on a region’s political economy; on the country’s popular culture; on the ways manhood, womanhood, whiteness, blackness, and social belonging were understood and reimagined.' These threads are all engagingly and intelligently brought together throughout...At the end of each chapter, readers are kept wanting more, which speaks to how engagingly these stories are told. Yet never does Guridy exchange insight for breeziness...The Sports Revolution is...a prompt for readers to more fully consider what it means to fight for justice both on and on the court, and how to more thoughtfully engage in those battles today.
— FanSided

Using the exuberant terminology of the times combined with his active writing style, Guridy holds his readers’ attentions with descriptions of key games and players, as well as negotiations and financiers...As Guridy reveals, Texas, and Texans like Lamar Hunt, Tom Landry, Don Meredith, Tom Vandergriff, and Nancy Richey, did have important roles in the evolution of sports during the mid-to-late twentieth century...[The Sports Revolution is a] well-written, thought-provoking examination of the topic...Fans of Texas athletics and other sports will find the book an informative source.
— Southwestern Historical Quarterly

[A] wonderful book...[Guridy's] book is always insightful and interesting. But his examination of the intersection of race and economics in the emergence of the NBA's San Antonio Spurs is particularly strong, as is a chapter examining the emergence of the Dallas Cowboy Cheerleaders as a national phenomenon. In a world where sports is again undergoing a transformation, The Sports Revolution offers a valuable lens through which to view both the dramatic changes of the 1970s and those so prominent in today's society.
— New Books in Sports

A needed, readable, and analytical perspective on sport in Texas mainly during the 1960s, 1970s, and 1980s...Alongside insightful evaluations of the big movers and shakers of Texas sport during the era, such as Lamar Hunt, Roy Hofheinz, and Darrell Royal, Guridy integrates the troubling experiences of race and gender from the racial integration of the Southwest Conference at Southern Methodist University in the 1960s to the famed 'Battle of the Sexes' tennis match in 1973 between Billie Jean King and Bobby Riggs in Houston. Specialists and non-specialists in sport history should find this book rewarding.
— CHOICE