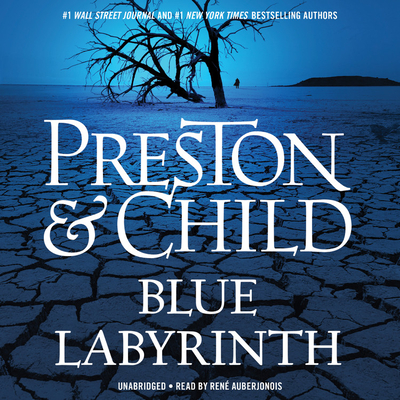 This is book number 14 in the Agent Pendergast Series series.

Special Agent Pendergast-one of the most original, compelling characters in all of contemporary fiction-returns in Preston and Child's new exhilarating novel
BLUE LABYRINTH
A long-buried family secret has come back to haunt Special Agent Aloysius Pendergast.
It begins with murder. One of Pendergast's most implacable, most feared enemies is found on his doorstep, dead. Pendergast has no idea who is responsible for the killing, or why the body was brought to his home. The mystery has all the hallmarks of the perfect crime, save for an enigmatic clue: a piece of turquoise lodged in the stomach of the deceased.
The gem leads Pendergast to an abandoned mine on the shore of California's Salton Sea, which in turn propels him on a journey of discovery deep into his own family's sinister past. But Pendergast learns there is more at work than a ghastly episode of family history: he is being stalked by a subtle killer bent on vengeance over an ancient transgression. And he soon becomes caught in a wickedly clever plot, which leaves him stricken in mind and body, and propels him toward a reckoning beyond anything he could ever have imagined....
The thrillers of Douglas Preston and Lincoln Child "stand head and shoulders above their rivals" (Publishers Weekly). Preston and Child's Relic and The Cabinet of Curiosities were chosen by readers in a National Public Radio poll as being among the one hundred greatest thrillers ever written, and Relic was made into a number-one box office hit movie. They are coauthors of the famed Pendergast series and their recent novels include Fever Dream, Cold Vengeance, Two Graves, and Gideon's Corpse. In addition to his novels, Preston writes about archaeology for the New Yorker and Smithsonian magazines. Lincoln Child is a former book editor who has published five novels of his own, including the huge bestseller Deep Storm.
Readers can sign up for The Pendergast File, a monthly "strangely entertaining note" from the authors, at their website, www.PrestonChild.com. The authors welcome visitors to their alarmingly active Facebook page, where they post regularly.
"Sherlock Holmes fans will relish Preston and Child's 13th novel featuring eccentric FBI agent Aloysius Pendergast (after 2012's Two Graves), one of their best in this popular series...easily stands on its own with only passing references to Pendergast's complex backstory."—Publishers Weekly (starred review) on White Fire

"Another highly entertaining and genuinely thrilling story from Preston & Child starring their romantic, faintly gothic, and always mysterious FBI agent, Aloysius Pendergast. As always the prose is elegant, replete with exquisite descriptions, and this time we're treated to dashes of historic characters Conan Doyle and Oscar Wilde, as well as a positively delicious serving of the great Sherlock Holmes. Through myriad shocks, surprises, twists and turns, the suspense never lets up. Great fun to the last page."—Anne Rice on White Fire

"The best Pendergast book yet - a collision between past and present that will leave you breathless."—Lee Child on White Fire