Hephaestus and the Island of Terror (Heroes in Training #10) (Paperback) 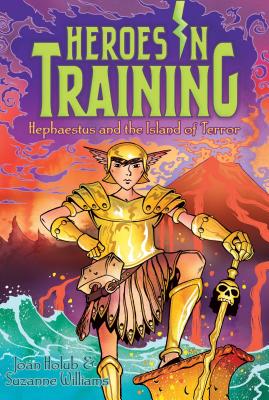 Hephaestus and the Island of Terror (Heroes in Training #10) (Paperback)

This is book number 10 in the Heroes in Training series.

Zeus and the Olympians might find a new leader among metal-working warriors in this Heroes in Training adventure.

Fresh off their adventure with Crius’s Cronies, the Olympians set out for the island of Lemnos, and there’s a reason they receive warnings as they travel: Warriors holding intricate weapons greet them as soon as they come ashore! Then they meet Hephaestus, the leader of the island who they quickly realize is actually one of them—the Olympian they were meant to find.

But Hephaestus isn’t so sure he wants to leave with the Olympians. After all, life is pretty good on Lemnos, and he loves being in charge of the Sintians, who inhabit the island. The Sintians made him their leader because of his metal-working prowess, and he’s been doing his best to keep them safe from Cronus’s armies ever since. Hephaestus suggests that if he does choose to go with the Olympians, he could be their leader. But what about Zeus? Not everyone is convinced he is still up for the job...
Joan Holub has authored and/or illustrated over 140 children’s books, including the Goddess Girls series, the Heroes in Training series, the New York Times bestselling picture book Mighty Dads (illustrated by James Dean), and Little Red Writing (illustrated by Melissa Sweet). She lives in North Carolina and is online at JoanHolub.com.