Uranus and the Bubbles of Trouble (Heroes in Training #11) (Hardcover) 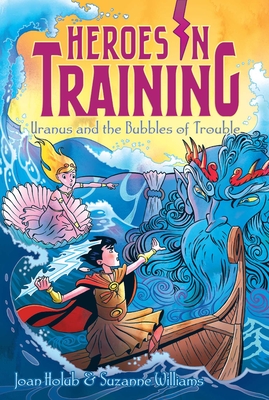 Uranus and the Bubbles of Trouble (Heroes in Training #11) (Hardcover)

This is book number 11 in the Heroes in Training series.

A clash between the Titans and The Olympians at sea leaves Zeus and his friends shipwrecked—and in a tidal wave of trouble—in this Heroes in Training adventure.

After an encounter with Uranus, God of the Sky (and father of the Titans), the Olympians find themselves in the middle of a battle between two big-time Titans. On Cronus’s orders, Titan Oceanus dives into the sea and causes it to turn even stormier. He’s heading straight for the Olympians’ boat, planning to capsize it, no doubt. Just when it looks like the Olympians are done for, Zeus throws his thunderbolt high and causes a huge battle in the sky between the Titans.

As broken stars and hunks of clouds crash to earth and into the sea around the Olympians and their ship, they manage to escape—thanks to some help from Zeus’s medallion and guide, Chip—but find themselves shipwrecked. And as Uranus’s stars begin to fall in the ocean, the huge splash makes a wave of bubbles that heads for the shore of the island where the Olympians and their ship are trapped. And Zeus has a feeling those bubbles mean trouble…
Joan Holub has authored and/or illustrated over 140 children’s books, including the Goddess Girls series, the Heroes in Training series, the New York Times bestselling picture book Mighty Dads (illustrated by James Dean), and Little Red Writing (illustrated by Melissa Sweet). She lives in North Carolina and is online at JoanHolub.com.