Hermes and the Horse with Wings (Heroes in Training #13) (Hardcover) 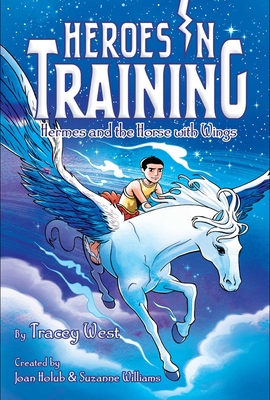 Hermes and the Horse with Wings (Heroes in Training #13) (Hardcover)

This is book number 13 in the Heroes in Training series.

Zeus and the Olympians are tasked with finding a magical horse in this Heroes in Training adventure.

When Zeus meets a young boy named Hermes, he claims to have their next quest from Pythia, the Oracle at Delphi. But he wants something for the information: Zeus must hand over the winged sandals he took from Perseus after their last battle. What he doesn’t know is that Perseus had stolen those sandals from someone…Hermes! Could those sandals be another magical object?

When Hermes starts to fly, Zeus knows they have found another Olympian for their group—and Hermes lets Zeus know their next adventure will be to “find the force that sings.” Since Pythia never tells them exactly the right words (her glasses tend to get a little foggy), they figure out that they are supposed to find “the horse with wings.”

With the help of a reluctant Hermes and another new boy named Ron, the Olympians are off in search of a winged horse­—with a few surprises along the way!
Joan Holub has authored and/or illustrated over 140 children’s books, including the Goddess Girls series, the Heroes in Training series, the New York Times bestselling picture book Mighty Dads (illustrated by James Dean), and Little Red Writing (illustrated by Melissa Sweet). She lives in North Carolina and is online at JoanHolub.com.