It Happened in Michigan: Stories of Events and People That Shaped Great Lakes State History (Paperback) 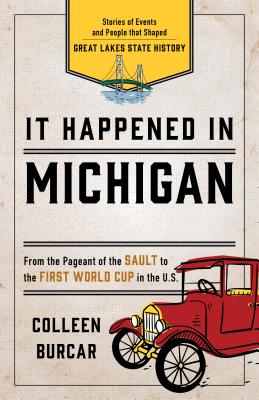 It Happened in Michigan: Stories of Events and People That Shaped Great Lakes State History (Paperback)


Usually Ships in 1-5 Days
True Tales from the Great Lakes State's Past-from the pageant of the Sault to a World Series that healed wounds Michigan is one-of-a-kind. America's only two-part state, with dual peninsulas, it has been host to a medley of cultures. And, while these cultures have not always coexisted peacefully, Michigan has conquered its brushes with adversity to reunite stronger than ever. It Happened in Michigan goes behind the scenes to tell its story, in short episodes that reveal the intriguing people and events that have shaped the Great Lakes State.
Colleen Burcar has worked as a reporter and news anchor in radio, television, and newspapers for many years in the Detroit area. She now works in media consulting, public relations, and freelance writing, while her voice continues to be heard in numerous commercials. She is the author of Michigan Curiosities and You Know You're in Michigan When . . . and shares her love of Michigan in speaking engagements across the state. The mother of a daughter, Kimberly, (now a transplant in Minnesota), Colleen proudly continues her life-long Michigan residence in Bloomfield Hills with her husband, Bryan Becker.