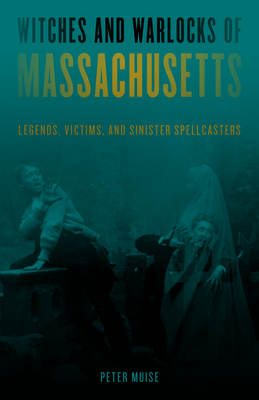 
Usually Ships in 1-5 Days
Witches and Warlocks of Massachusetts is a collection of legends and historical accounts about witches and warlocks from the Bay State. Organized by region, city and town, the book's dozens of stories include the earliest Puritan accounts of 17th century witches, urban legends about desolate locations haunted by ghostly witch hunt victims, tales of Cape Cod sailors battling witches, and other stories of sinister (and sometimes sympathetic) spellcasters. Massachusetts has a rich history of witchcraft that spans nearly four centuries. Most people are aware of the Salem witch trials but fewer know about the Dogtown witches, the Pepperell farmer who hired a hypnotist to save his bewitched daughter, or Half-Hanged Mary, the witch who died twice and inspired The Handmaid's Tale. These stories are known locally in the towns where they occurred but have never been collected into one book before.
Peter Muise is a lifelong resident of New England and holds degrees in anthropology from Bates College and Brandeis University. He has blogged about local folklore since 2008 at newenglandfolklore.blogspot.com and is the author of Legends and Lore of the North Shore (2014). His writing has also appeared in 13 Most Haunted Crime Scenes Beyond Massachusetts (2016) and The Real Witches of New England (2018), among other places. He has appeared on Mysteries at the Museum, podcasts, and radio shows to talk about local legends and folklore.