Breathtaking: How One Family Cycled Around the World for Clean Air and Asthma (Paperback) 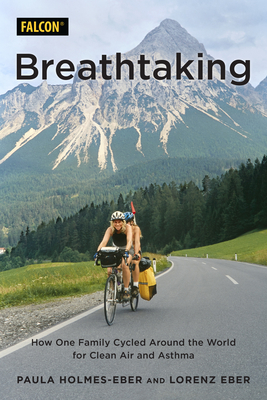 Breathtaking: How One Family Cycled Around the World for Clean Air and Asthma (Paperback)


Usually Ships in 1-5 Days
Geared up with two tents, six panniers, two tandem bicycles and one stuffed pink pig, Paula and Lorenz Eber set off from Seattle, Washington to cycle the world with their two daughters, eleven-year old Yvonne, and her thirteen year old sister, Anya. Their dream: to pedal in a complete circle around the world using a carbon free, environmentally friendly way to travel. Their goal: to raise awareness of asthma - a disease that Paula has suffered from her entire life - and the world's desperate need for clean air. Breathtaking is the exciting and inspiring true story of their adventures. Readers follow the Ebers across Europe, Asia, the South Pacific and North America as they raise their daughters around the globe. School is conducted outdoors on mountaintops. The responsibilities of parenting have been expanded to include hunting for an English copy of the latest Harry Potter book. And family togetherness takes on a new meaning as the Ebers must work together to survive a 100-degree heat wave in Italy, drug smugglers in Russia, a broken foot in New Zealand and a tornado in the U.S. Yet, as the family pedals farther and farther away from home, they realize that the greatest challenge they face is the journey that they must undergo within themselves. The Ebers returned home twenty-four countries and 14,931 km (9,332 miles) later - raising $65,000 for the non-profit organization, World Bike for Breath. They spoke about clean air and asthma to more than 150 newspapers, magazines, and TV stations, including Time for Kids, NPR, and PBS's Roadtrip Nation. They are the only family on record to complete a full circumnavigation of the world by bicycle.
Paula Holmes-Eber, Ph.D., is an anthropologist, professor, and the author of six previous books. She has published dozens of articles about cycling and adventuring as a family, including frequent contributions to Adventure Cyclist and the League of American Bicyclists Magazine. To learn more about Paula and the Eber family's adventures, go to www.bike4breath.com. Lorenz Eber, P.E., is an aeronautical and civil engineer. In addition to his passion for cycling, he is a private pilot, sailor, and photographer. His photographs have appeared in numerous books and magazines, including Time and on the cover of Adventure Cyclist.