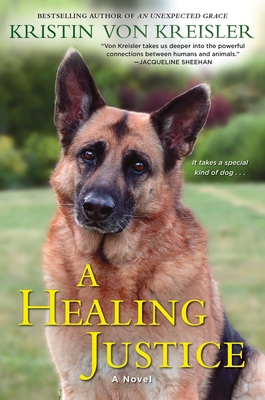 
Usually Ships in 1-5 Days
From the bestselling author of Earnest and An Unexpected Grace comes a novel about a woman, a dog, and the hope and love that can emerge from tragedy . . .

Two years ago, police officer Andrea Brady fell madly in love with a black-muzzled, slightly rumpled German shepherd who showed up at her house one misty autumn day. Now, with the brave and intuitive Justice as her expert K-9 drug sniffer, she’s found an unbeatable partner. Then the unthinkable happens. A savage attack leaves a teenager dead and Andie trapped in every cop’s worst nightmare. Placed on administrative leave, she’s pursued by media and investigated by a deputy sheriff whose handling of the high-profile case could earn him a coveted promotion.

Haunted by self-doubt, Andie is in danger of losing everything—her career, her freedom, and the critically injured dog who’s her soul mate. But as she finds kind allies in her Puget Sound island community, the road back becomes a journey of healing for both Andie and her canine companion. And Andie learns important lessons about justice—and about Justice—as she struggles to find the courage to forgive herself and reclaim the gift of her life . . .

Praise for the novels of Kristin von Kreisler

“In this terrific and uplifting novel, von Kreisler shows how the love between a dog and a person can prove transformative.”  —Modern Dog Magazine
Kristin von Kreisler writes articles and bestselling books about animals. To get her stories, she followed a grizzly bear for a week, went hang gliding to see how an eagle felt soaring through the sky, and watched in awe as millions of bats emerged from a cave at dusk like clouds of smoke.

After writing three acclaimed nonfiction books, Kristin made a smashing fiction debut with the bestselling novel An Unexpected Grace and followed up with Earnest. Kristin’s books have been translated into twelve languages.

She lives in Washington with her husband and their beloved rescue dog Bridget, who is their sixth German shepherd.  From Kristin's desk she watches ospreys and seals, and most afternoons in good weather she works in her garden.  She says she’d rather do that than breathe.  Visit her on Facebook and Instagram or at www.kristinvonkreisler.com.