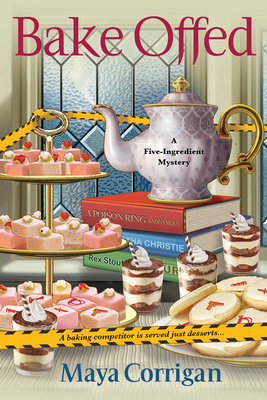 This is book number 8 in the A Five-Ingredient Mystery series.

In the new installment of beloved author Maya Corrigan’s Five-Ingredient Mystery series, join Val Deniston and her grandfather at the Maryland Mystery Fan Fest in the bake-off of the century that makes “killing competition” take on a whole new meaning…

When the Deadly Desserts bake-off lives up to its name, Val and Granddad turn up the heat on a killer . . .

The Maryland Mystery Fan Fest sounds like exactly the fun getaway cafe manager Val Deniston and her grandfather could use. Granddad will even compete in a dessert competition in which contestants assume the roles of cooks to famous fictional sleuths. Playing Nero Wolfe’s gourmet cook Fritz is an exciting challenge for Granddad. A restaurant manager is playing Lord Peter Wimsey’s valet and cook Bunter. But Granddad is steamed to learn who will be playing Sherlock Holmes’s landlady, Mrs. Hudson—his nemesis Cynthia Sweet, who he believes ripped off his five-ingredient theme from his column “Codger Cook” to use in her own recipe column.

Apparently, he isn’t the only one who has a beef with his not-so-sweet competitor. When she’s found dead in her room with the teakettle whistling, it’s up to Val and her grandfather to sort through the festival goers to find out who was most definitely not a fan of Cynthia Sweet . . .

Maya Corrigan is the author of the Five-Ingredient Mystery Series, featuring a café manager and her kooky grandfather with five suspects, five clues, and five ingredient recipes in each installment. Corrigan lives near Washington, D.C., close to the setting for her series, Maryland's Eastern Shore. A winner of the Daphne du Maurier Award for Excellence in Mystery and Suspense, she has published essays on drama and short stories as well as taught courses in writing, detective fiction, and American literature at Georgetown University and NOVA community college. Please visit her online at MayaCorrigan.com.