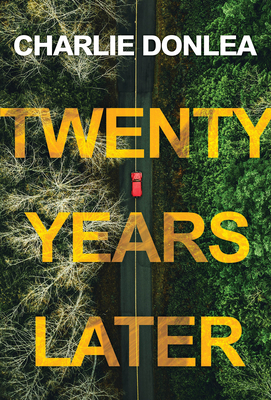 Fans of Verity by Colleen Hoover won’t want to miss this thrilling new suspense novel from the #1 internationally bestselling author of The Girl Who Was Taken! Hiding her own dark past in plain sight, a TV reporter is determined to uncover the truth behind a gruesome murder decades after the investigation was abandoned. But TWENTY YEARS LATER, to understand the present, you need to listen to the past…

Avery Mason, host of American Events, knows the subjects that grab a TV audience’s attention. Her latest story—a murder mystery laced with kinky sex, tragedy, and betrayal—is guaranteed to be ratings gold. New DNA technology has allowed the New York medical examiner’s office to make its first successful identification of a 9/11 victim in years. The twist: the victim, Victoria Ford, had been accused of the gruesome murder of her married lover. In a chilling last phone call to her sister, Victoria begged her to prove her innocence.

Emma Kind has waited twenty years to put her sister to rest, but closure won’t be complete until she can clear Victoria’s name. Alone she’s had no luck, but she’s convinced that Avery’s connections and fame will help. Avery, hoping to negotiate a more lucrative network contract, goes into investigative overdrive. Victoria had been having an affair with a successful novelist, found hanging from the balcony of his Catskills mansion. The rope, the bedroom, and the entire crime scene was covered in Victoria’s DNA.

But the twisted puzzle of Victoria’s private life is just the beginning. And what Avery doesn't realize is that there are other players in the game who are interested in Avery’s own secret past—one she has kept hidden from both the network executives and her television audience. A secret she thought was dead and buried . . .

Accused of a brutal murder, Victoria Ford made a final chilling call from the North Tower on the morning of 9/11. Twenty years ago, no one listened. Today, you will.

“An entertaining thriller…surprises lurking around every corner.” —Kirkus Reviews

“A superb storyteller.” —Robert Dugoni, New York Times bestselling author
Charlie Donlea is the critically acclaimed, USA Today, Indiebound and #1 internationally bestselling author of Summit Lake, The Girl Who Was Taken, Don't Believe It, Some Choose Darkness, The Suicide House, and Twenty Years Later. Published in nearly 30 countries and translated into more than a dozen languages, Donlea has been praised for his "soaring pace, teasing plot twists" (BookPage) and talent for writing an ending that "makes your jaw drop" (The New York Times Book Review). He was born and raised in Chicago, where he continues to live with his wife and two children. Visit him online at CharlieDonlea.com.

“[Plot lines] merge seamlessly into a surprise ending that I didn’t see coming. Author Charlie Donlea has an easy readable style and skillfully adds depth and intrigue to this enjoyable thriller.” —Mystery Scene

“A clever look at fugitive(s), journalism, and loyalty. A fun read and satisfying ending with a dangling moral issue.” —Daniel Island News

“There are a lot of threads in this plot, but Donlea weaves it all together really well…Twenty Years Later is a fast-paced read with just enough depth to keep you invested in what’s going on. If you’re in a reading rut, this is a great rut buster!” —Jeremy Anderberg, Read More Books Substack

“A great plot that incorporates family, lifelong friendship, betrayal, and the specter of 9/11…deep with several sub-plots that keep you guessing about how it will all come together. The ending is very unexpected on several fronts. Any good crime and mystery fan will enjoy this book.” —The Southern Booksellers Review

“An entertaining thriller…surprises lurking around every corner.” —Kirkus Reviews

“Probably the most complex and morally satisfying novel that Donlea has written thus far. Here, he deftly utilizes 9/11 to pinpoint a moment in time that is necessary to the plot while not in any way using the tragedy to manipulate the feelings of readers…Donlea subtly moves away from the 9/11 tragedy and makes his story more about the present-day characters as they battle to find the truth through a sea of lies and false accusations.” —Bookreporter

“Exciting, with all the right touches, captivating from the first page to the last.” —Steve Berry, New York Times bestselling author on Summit Lake

"Donlea obliges more perverse tastes with more killing, more mystery and more sleuths...Rory maintains a firm grip on our interest, mainly because "the mysterious and unexplained intrigued her" as much as it does us. And let's not forget that she speaks to those terrifying dolls." —The New York Times Book Review on The Suicide House

"A perfectly executed and entirely satisfying read, Don't Believe It is a gripping thriller that will blow readers away, from the first page right up to the very last words. Charlie Donlea's best book yet!" —Mary Kubica, New York Times bestselling author

"Gripping...the book's real strength is the idiosyncratic Rory, who suffers from OCD and is on the autism spectrum, a deeply developed character readers can't help rooting for. Hopefully, she'll be back soon." —Publishers Weekly, Best Books of Summer on The Suicide House

“A gem of a mystery, fast-paced and suspenseful.” —Catherine Coulter on Summit Lake"Charlie Donlea is a superb psychological suspense writer...the book has a fast-paced plot and main characters unlike any typically found in this genre." —Seattle Book Review on The Suicide House

"Part 1970s serial-killer thriller and part contemporary Chicago crime novel, this deceptively quick read has something for everyone." —Booklist on Some Choose Darkness

"In Donlea's skillful hands, this story of obsession, murder, and the search for truth is both a compassionate character study and a compelling thriller." —Kirkus Reviews on Some Choose Darkness

"You can't blame Charlie Donlea if the ending of his novel makes your jaw drop. The title alone Don't Believe It is fair warning that his characters are no more to be trusted than are our initial impressions of them." —The New York Times Book Review on Don't Believe It

"Don't Believe It displays excellent craftsmanship, from the way sentences are constructed to the serpentine plot. The prose sings. Sentences are short and punchy. Word choices are specific and impeccable. The story captivates. The central mystery unfurls in layer after layer of falsehoods and deception. It's easy to get hooked on the book's heady cocktail of highly rated television and high stakes subterfuge." —ForeWord Reviews

"[A] fast moving page-turner...Donlea skillfully maximizes suspense by juggling narrators and time." —Publishers Weekly on The Girl Who Was Taken

"Donlea's sophomore effort is solid. He effectively tells the story using shifts in time, and...keeps the reader guessing and second guessing until the end, thanks to an expertly crafted abundance of potential suspects. For fans of medical suspense and forensic thrillers, especially those who like morgue scenes in television crime shows." —Library Journal on The Girl Who was Taken

"If you're looking for a gripping thriller that will give you the chills in the heat of summer, you'll love Some Choose Darkness." —SheReads, Best Books of Summer

"With a soaring pace and teasing plot twists, Charlie Donlea's debut mystery is like a cool drink of water with a twist of lemon. It's refreshing to find a book that has such a well developed plot and excellent writing to back it up." —BookPage on Summit Lake