Double Cross: The Explosive Inside Story of the Mobster Who Controlled America (Paperback) 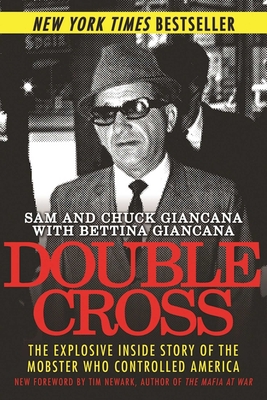 Double Cross: The Explosive Inside Story of the Mobster Who Controlled America (Paperback)

One of the most feared Chicago mobsters Sam Giancana clawed his way to the top of the Mafia hierarchy by starting as a hit man for Al Capone. He was known as one of the best vehicle escape artists, a tenacious business man, and a ruthless killer. He partied with major stars such as Frank Sinatra and Marilyn Monroe and did business with agents ranging from the CIA to the Vatican to the shah of Iran.

When politician Joe Kennedy gave Giancana the chance to use mob muscle to get his son John elected, Giancana jumped at the task. But the Kennedy brothers double-crossed him, waging full-out war on organized crime throughout the United States. And Giancana went after them.

Written with suspense and conviction, we learn about how the CIA asked Giancana to assassinate Fidel Castro

The book includes Giancana's testimony about the truth of his involvement in the deaths of Monroe and others, among others. Chuck Giancana, Sam's brother, contributes a unique perspective of the mob’s relationship with the Bay of Pigs and many other pivotal events of the 60's and beyond. Double Cross is an eye-opening account of the interworking of the government and the mob and how this relationship has impacted American history.

“Mobster chief Sam Giancana was at the heart of one of America’s most notorious criminal conspiracies and this book gives us fresh information on that. His web of crimes and associations involve some of the most glamorous figures of his age, including the Kennedy family, Frank Sinatra and Marilyn Monroe. Written with the crisp cadence of a thriller, it is a fascinating expose of dark deals and adds more layers to that most famous mystery—who really killed President John Kennedy?”—Tim Newark from his Foreword
Historian and journalist Tim Newark is the author of numerous critically acclaimed military history books, including The Barbarians, War in Britain, Where They Fell, Turning the Tide of War, and Camouflage. He was the editor of Military Illustrated for 17 years and the scriptwriter for seven TV military history documentary series, including Hitler’s Bodyguards. Tim Newark lives in Bath, UK. Endorsements:  'An engrossing history that reads like a thriller. The Godfather meets Band of Brothers.' - Andrew Roberts
‘An extraordinary tale …’ – History Today magazine