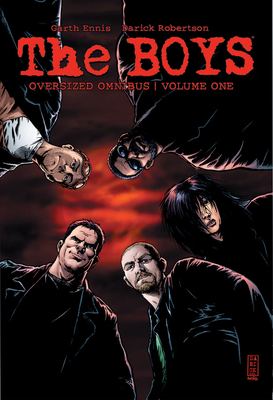 
Email or call for price
To Celebrate the 15th Anniversary, Dynamite is offering three all-new oversized hardcover omnibus volumes of The Boys.
This first volume includes the first 30 amazing issues of the critically acclaimed series, that is the bases for the popular adaptation currently running on Prime This is going to hurt In a world where costumed heroes soar through the sky and masked vigilantes prowl the night, someone's got to make sure the "supes" don't get out of line. And someone will Billy Butcher, Wee Hughie, Mother's Milk, The Frenchman, and The Female are The Boys: A CIA-backed team of very dangerous people, each one dedicated to the struggle against the most dangerous force on Earth - superpowers Some superheroes have to be watched. Some have to be controlled. And some of them - sometimes - need to be taken out of the picture. That's when you call in The Boys Contains the stories: The Name of the Game, Get Some, Cheery, Glorious Five Year Plan, Good for the Soul, I Tell you No lie, GI and We Gotta Go Now. Also includes all covers and bonus materials, including script pages, special introductions, alternate covers and more Collecting The Boys #1-30.