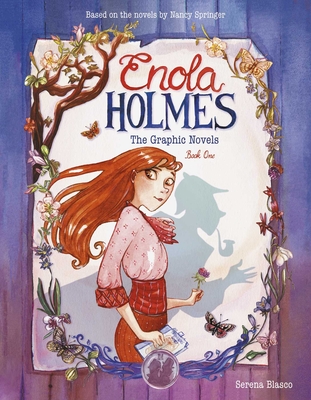 This is book number 1 in the Enola Holmes series.

14-year-old Enola Holmes wakes on her birthday to discover that her mother has disappeared from the family's country manor, leaving only a collection of flowers and a coded message book. With Sherlock and Mycroft determined to ship her off to a boarding school, Enola escapes, displaying a cleverness that even impresses the elder Holmes. But nothing prepares her for what lies ahead…

Book One in the series includes three thrilling mysteries: The Case of the Missing Marquess, The Case of the Left-Handed Lady, and The Case of the Bizarre Bouquets. At the back of the book, readers can explore a portfolio of pages from Enola's secret notebook!

Serena Blasco was born in France and studied at the School of Applied Arts in Aix-en-Provence, worked as a graphic designer, and published her first comics work in 2014. She began illustrating the adaptation of Nancy Springer's Enola Holmes novels in 2015.

"Resplendent in lush watercolor illustrations, these stories (based on the popular book series by Nancy Springer) are perfect for readers who enjoy fast-paced plots and strong, ingenious female protagonists... Hand to tween and teen historical mystery lovers who enjoy a healthy dose of action in their detective stories." (School Library Journal)