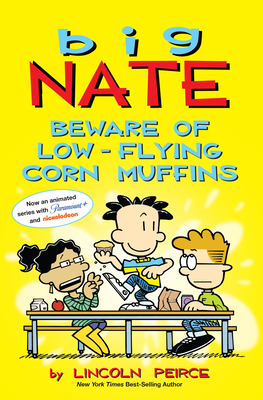 This is book number 26 in the Big Nate series.

Now an animated series with Paramount+ and Nickelodeon!

In this series of hilarious Big Nate comics by bestselling author Lincoln Peirce, the jokes are flying, and the laughs are always on target!

Warning: Big Nate is back, and the whole school’s on high alert. Can drama queen Dee Dee compete with Nate’s down-and-dirty gossip gathering? Will Mrs. Godfrey lighten up when she learns that she and Nate share a common obsession? And what happens after Coach John wanders into the flight path of a Nate-powered projectile? In this brand-new collection of Big Nate comics, the self-styled King of Detention is well-armed...so proceed with caution. Join Nate and friends for another laugh-packed installment of Big Nate comic fun.

Lincoln Peirce has been drawing the Big Nate comic strip for more than 20 years. Born in Ames, Iowa, Peirce grew up in Durham, New Hampshire. As a kid, he began creating his own strips in the sixth grade. Peirce taught high school in New York City and has created several animated pilots for Cartoon Network and Nickelodeon. He lives in Portland, Maine, with his family.