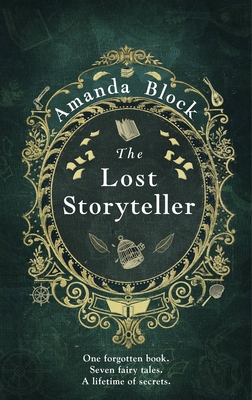 
Usually Ships in 1-5 Days
"A powerful novel about the bond between fathers and daughters, and how stories connect us all. I loved it" Jenny Colgan

THE LOST STORYTELLER is the heartwarming and evocative debut novel from a stunning new voice in fiction, Amanda Block. Perfect for fans of Ruth Hogan, Jessie Burton and Diane Setterfield.

Rebecca hasn't seen her father Leo since she was six. Her family never talk about him, and she has long since pushed him firmly to the back of her mind. All she knows is that, once upon a time, he was a well-loved children's TV star.

But when a journalist turns up uninvited at her office, asking questions about her once-famous father, Rebecca starts to wonder whether there is more to Leo's absence than she realized. Then, looking for answers, she unearths a book of fairy tales written by Leo and dedicated to her - but what use are children's stories to her now, all these years later?

Tentatively, Rebecca tries to piece together her father's life, from the people he used to know and her own hazy memories. Yet her mind keeps returning to the magical, melancholic fairy tales, which seem to contain more truth than make-believe. Perhaps they are the key to unlocking the mystery of her father, the lost storyteller; to revealing who he was, what he went through - and even where he might be now...

THE LOST STORYTELLER celebrates the power and resilience of imagination.

"Absolutely beautiful . . . A cleverly wrought tale of fathers and daughters, and a bond buried so deep that it is lost to folklore" Polly Crosby, author of The Illustrated Child

"Captivating, moving and profound. I loved it! A spellbinding novel about the power of the stories we tell both to ourselves and to others" Tracey Emerson, author of She Chose Me

"Incredibly moving . . . A genuinely beautiful must-read" Buki Papillon, author of An Ordinary Wonder
Originally from Devon, Amanda moved to Edinburgh in 2007, where she attained a master's degree in creative writing. Since then, she's divided her time between ghostwriting, editing and tutoring.

Amanda's writing is often inspired by myths and fairy tales, which she uses as starting points to tell new stories. Her work has been shortlisted in contests such as the Bridport Prize and the Mslexia Short Story Competition. The Lost Storyteller is her first novel.