A Girl Made Of Air (Paperback) 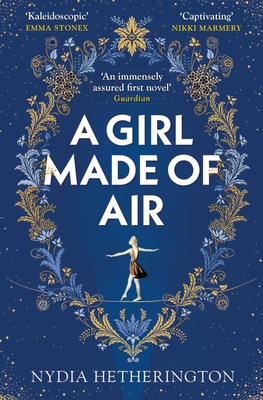 A Girl Made Of Air (Paperback)


Usually Ships in 1-5 Days
"A captivating tale of love and loss and finding connection in the most unexpected places" --Nikki Marmery, author of On Wilder Seas

A lyrical and atmospheric homage to the strange and extraordinary, perfect for fans of Angela Carter and Erin Morgenstern.

This is the story of The Greatest Funambulist Who Ever Lived...

Born into a post-war circus family, our nameless star was unwanted and forgotten, abandoned in the shadows of the big top. Until the bright light of Serendipity Wilson threw her into focus.

Now an adult, haunted by an incident in which a child was lost from the circus, our narrator, a tightrope artiste, weaves together her spellbinding tales of circus legends, earthy magic and folklore, all in the hope of finding the child... But will her story be enough to bring the pair together again?

Beautiful and intoxicating, A Girl Made of Airbrings the circus to life in all of its grime and glory; Marina, Manu, Serendipity Wilson, Fausto, Big Gen and Mouse will live long in the hearts of readers. As will this story of loss and reconciliation, of storytelling and truth.

Originally from Leeds, Nydia Hetheringtonmoved to London in her twenties to embark on an acting career. Later she moved to Paris where she studied at the Jacques Lecoq theatre school before creating her own theatre company. When she returned to London, she completed a creative writing degree at Birkbeck.