Hercules and the Nine-Headed Hydra (Heroes in Training #16) (Paperback) 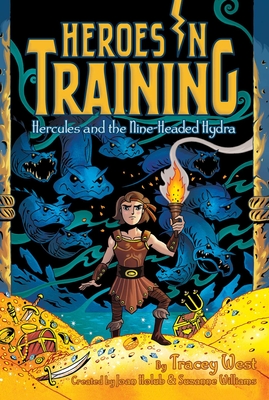 Hercules and the Nine-Headed Hydra (Heroes in Training #16) (Paperback)

This is book number 16 in the Heroes in Training series.

Zeus and his friends are back for another adventure in this latest Heroes in Training chapter book!

Since defeating the Titans, Zeus and his fellow Olympians have taken over Mount Olympus. Things are nearly back to normal…until a stranger named Hercules shows up, asking for help. He’s on the run from Eurythseus, King of Argon, who is after Hercules for egging his temple.

Before Zeus can help, Eurythseus himself appears. It turns out that Hercules has also been bragging that he is the ruler of Olympus, and Eurythseus intends to declare war on the Olympians’ new home.

Zeus’s friends come up with an idea—maybe Hercules could make up for egging Eurythseus’s temple. The Oracle Pythia reveals that in order to do this, Hercules must get a scale from a huge, nine-headed serpent—the Hydra. Will this be enough to please Eurythseus? Or is another battle on the horizon for the Olympians?
Joan Holub has authored and/or illustrated over 140 children’s books, including the Goddess Girls series, the Heroes in Training series, the New York Times bestselling picture book Mighty Dads (illustrated by James Dean), and Little Red Writing (illustrated by Melissa Sweet). She lives in North Carolina and is online at JoanHolub.com.