I Told You This Would Happen (Paperback) 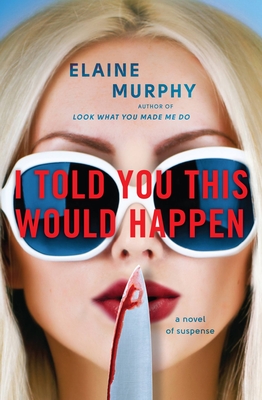 I Told You This Would Happen (Paperback)


Usually Ships in 1-5 Days
Elaine Murphy is back with a new thriller that will leave fans of Darcey Bell, B.A. Paris, and Samantha Downing utterly reeling.   Carrie’s sister is dead.

Four months after losing her sister, Becca—a serial killer unknown to everyone else in their town—Carrie Lawrence is finally free of her manipulative clutches. From now on, she’s keeping her hands clean, no more hiding dead bodies in the middle of the night, no more lies.

Then she attends a meeting of the Brampton Kill Seekers, a group of amateur local sleuths, and learns that a recent victim left behind a note that incriminates her in their disappearance. All of a sudden, the quiet, law-abiding life she’s been planning starts to unravel.

She’s never had so much to lose.

In her frantic quest to keep her secret dead and buried, she discovers someone nefarious lurking in the shadows…someone who’ll go to any lengths to bring her dark truths to light. Now if Carrie wants her secrets to stay hidden, she’ll have to get her hands very, very dirty.

Elaine Murphy is a Canadian author who has lived on both coasts and several places in between. Among other things, she has volunteered in Zambia, taught English in China, and jumped off a bridge and out of an airplane. She has a diploma in Writing for Film & Television but has never worked in either field. Instead she took an interest in the dark side and began plotting suspense and thrillers. She enjoys putting ordinary people in extraordinarily difficult situations and seeing what they do about it. She lives in Vancouver, Canada.

"Murphy sensitively explores the bonds of sisterhood amid all the murder and mayhem. Those looking for an offbeat serial killer thriller will have fun."

—Publishers Weekly on Look What You Made Me Do

“Good versus evil has never been so twisted or deliciously cunning. I stayed up all night to see how it ended.”

—Alessandra Torre, New York Times bestselling author, on Look What You Made Me Do