Helping the Good Do Better: How a White Hat Lobbyist Advocates for Social Change (Paperback) 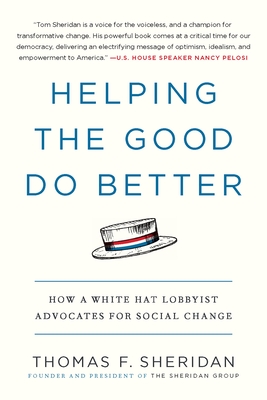 Helping the Good Do Better: How a White Hat Lobbyist Advocates for Social Change (Paperback)


Usually Ships in 1-5 Days
How to effect positive social change by the top progressive white hat lobbyist in Washington.

HELPING THE GOOD DO BETTER pulls back the curtain on the corridors of power in Washington to reveal how social change really happens. This book offers lessons from the trenches on how some of this generation's most defining social issues-AIDS, disabilities, global poverty, cancer, human trafficking, national service, early childhood education, and social entrepreneurship -- engendered landmark federal policies. Each chapter tells the story of how a particular issue was shaped by the movements and legislation at the center of public debate. Each case provides powerful lessons about how coalitions are built, strategies crafted, and powerful interests challenged in high-stakes, no-holds-barred political battles.

Doing good requires more than just providing programs and services. It requires coordination, organization, and a new, stronger emphasis on and dedication to advocacy. Participating in advocacy is no longer a luxury -- it is a necessity. Visionaries and activists together with "white hat" lobbyists -- people who understand the power of politics and who are able to put it to work to serve the public interest -- have won some of the most transformative policy fights in recent times. The culmination of those experiences, of fighting and winning on behalf of public interest causes, is presented here in a new theory for social change. Successful campaigns and movements must possess a lobbyist's combined approach to policy, politics, and press. Leveraging these 3 Ps, with true passion and discipline, can create results that are nothing short of awe-inspiring.

An insightful first-person guide to advocacy by a white-hat lobbyist who was in the rooms where historic social changes were made, HELPING THE GOOD DO BETTER is a direct and honest look at government in action and the behind-the-scenes players who help make progress a reality.
Tom Sheridan is the nation's foremost advocate for public interest causes and social impact. His career spans more than 30 years and has touched nearly all of the transformative social issues of our time, both domestically and internationally. From the AIDS pandemic with Bono to 21st century social innovation, Tom has used his heart and his head to lead successful strategies that have changed the world. He is a social worker by profession and a rare "white hat" lobbyist by trade. Tom is married to Vince Walsh. They live in Washington, DC and Lewes, DE with their two dogs and two horses.
"Tom Sheridan is a voice for the voiceless, and a champion for transformative change. His powerful book comes at a critical time for our democracy, delivering an electrifying message of optimism, idealism, and empowerment to America."—Speaker Nancy Pelosi

"Stopping the Bad from Making Things Worse!!! is another title for this book. That's one of the reasons I held on to Tom Sheridan quite tightly in the early days at the ONE Campaign when we were fighting despair and deprivation in the poorest places on the planet. He is rich company."—Bono

"Tom Sheridan's book is as timely as it is important. He poignantly reminds us that good happens only when the good get in the fight. Tom has led important battles that have changed this country for the better. This excellent book tells those stories and, in the process, gives us a road map for making positive change in the future."—Vicki Kennedy

"There is much that corporate citizenship executives can learn from Helping the Good Do Better. Tom's book pulls the curtain back on how social issues, many that are important to business, get turned into policy, legislation, and law. This is of particular importance in the era of brands taking stands, the rise of employees demanding that the company's values reflect their own, and customers' purchasing preferences often determined by a company's social positions."—Jeff Hoffman, corporate citizenship, philanthropy & civic engagement leader

"Helping the Good Do Better is a compelling and hopeful playbook for how to make positive social change happen in a Washington where that doesn't always seem possible. This book is full of practical advice and important lessons from someone who is so often in, as the play Hamilton would put it, 'the room where it happens.' This is a powerful guide for advocates on how to fight the good fight!"—U.S. Senator Chris Coons

"Sheridan formed and executed a strategy that changed the world. And he's done it more than once. Who else can say that?"—Bobby Shriver, co-founder, ONE and (RED)

"In order to fix what is broken with Washington and our divisive politics, we need good people to get involved and stay engaged. This book is a call to action for more engagement and it reminds us about the goodness that is possible in America. Helping the Good Do Better is not only a chronicle of awesome work, it is the backbone of what will keep America great even through troubled times. Tom writes beautifully but it is his actions that truly inspire."—U.S. Senator Tammy Baldwin

"Finally, someone has challenged the reflexive, conventional view about lobbying and power in Washington. Helping the Good Do Better is a testament to everyday Americans who, collectively wielding their passion and principles, have transformed public policy while leaving an indelible reminder that our elected officials work for the people -- not the other way around."—Kevin Madden, senior advisor to Mitt Romney's presidential campaigns

"You'll start reading Helping the Good Do Better because of your commitment to social change; you won't be able to put it down because of the riveting -- often funny -- stories and the pragmatic lessons from one of Washington, D.C.'s finest strategists. Tom not only takes you behind the scenes as policy gets made and movements built, but every chapter provides practical advice whether you're working in your community, your state capital, or on Capitol Hill."—Melody C. Barnes, co-director, Democracy Initiative, University of Virginia, and former director, White House Domestic Policy Council (2009-2012)

"The stories Thomas tells are inspiring, colorful, vast, and personal. He captures the fear of the early AIDS epidemic, the infighting among cancer groups lobbying for federal research dollars, and the joy of seeing your national service agenda embraced by the next president. Best of all, Thomas demonstrates why the fight is worth it. Thomas's career is more than a lesson: It's an inspiration."—Patti Solis Doyle, CNN contributor and presidential campaign manager

"Helping the Good Do Better chronicles the aspirational vision, authentic values, and tenacious strategies that led me to partner with Tom and the Sheridan Group as the main policy and advocacy consultancy for the ASBC. Our organization is committed to the 'Triple Bottom Line' of people, planet, and profit."—Hammad Atassi, CEO, American Sustainable Business Council

"I read Helping the Good Do Better in one sitting. Packed with vivid stories and practical tips for both citizens who care and committed change agents, Sheridan makes a compelling argument for the essential role of advocacy in any effort to improve communities. The insightful commentary, hard-won lessons, and tools contained in Helping the Good Do Better are incredibly relevant for this generation of citizen entrepreneurs asking 'What can I do?'"—Cheryl Dorsey, CEO, Echoing Green

"Sheridan makes a much-needed contribution with his new book. Most significantly for me, Tom offers those of us who straddle the applied and academe a better understanding of the theoretical foundations of advocacy so that it can be captured and communicated to students of government and political science everywhere."—Patrick Griffin, academic director, Public Affairs and Advocacy Institute, American University

"Sheridan opens an enjoyable and insightful window into his work on behalf of Americans who deserve better. Through engaging stories, he reminds us that our government has great power to do good. In our era of highly partisan politics, Sheridan boldly asserts that 'the non-profit sector needs to offer leadership that brings the American public together.'"—John Staud, PhD, executive director, ACE Program, University of Notre Dame

"At last, there is a true bible for how nonprofits can effect real transformative change. I was a witness to many of these stories -- from the front lines of the AIDS epidemic in Atlanta to the White House. Tom's brand of pragmatism and political savvy might occasionally ruffle feathers, but he fights to win with the clear understanding that when you fight for those who can't fight for themselves the stakes are always higher. However, these pages bring those fights into perspective with his signature honest, humorous 'Irish storytelling.' Here is a book that tells you how a good guy finally won, and taught countless advocates how to win in the process."—Sandy Thurman, White House AIDS Czar (Clinton Administration, 1997-2001)

"For four score and two years, I've been a witness to a generation of social change and I know what it takes to take on the big issues and win. Tom is wise, disciplined, tough, strategic, and deeply committed to American Idealism and the promise it still holds for the great task of citizenship. This book passes the baton and inspires the reader to carry on."—Former U.S. Senator Harris Wofford, author of Of Kennedy and Kings

"[Sheridan] combines his sharp intellect, political acumen, and impressive record of successful measures into a sage guide on how social change occurs. Overall, [his] message that even small action can have a collective impact is compelling, and the challenge is for people to 'step up, lean in, push harder, and take action' to make American government work better for the people. An empowering motivational tool for readers interested in proactive politics."—Kirkus