Tunnel 29: The True Story of an Extraordinary Escape Beneath the Berlin Wall (Paperback) 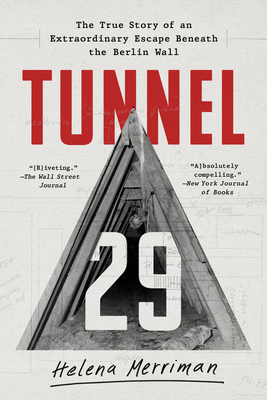 Tunnel 29: The True Story of an Extraordinary Escape Beneath the Berlin Wall (Paperback)


Usually Ships in 1-5 Days
Based on a hit podcast series, this book tells the unbelievable true story of an escape tunnel under the Berlin Wall--the people who built it, the spy who betrayed it, and the media event it inspired.

In September 1961, at the height of the Cold War, 22-year-old Joachim Rudolph escaped from East Germany, one of the world's most brutal regimes. He'd risked everything to do it. Then, a few months later, working with a group of students, he picked up a spade... and tunneled back in.

The goal was to tunnel into the East to help people escape. They spend months digging, hauling up carts of dirt in a tunnel ventilated by stove pipes. But the odds are against them: a Stasi agent infiltrates their group and on their first attempt, and dozens of escapees and some of the diggers are arrested and imprisoned. Despite the risk of prison and death, a month later, Joachim and the other try again and hit more bad luck: the tunnel springs a leak. After several attempts, run-ins with a spy and secret police, and some unlikely financial aid from an American TV network, they finally break through into the East, and free 29 people.
This is the story of their great escape, the NBC documentary crew that filmed it, and the U.S. government's attempts to block the film from ever seeing the light of day. But more than anything, this is the story of what people will do to be free.
Helena Merriman is a broadcast journalist who presented and produced Tunnel 29, BBC Radio 4's new podcast about a miraculous escape under the Berlin Wall. She is also the co-creator of British Podcast Award-winning series The Inquiry, and previously worked as a reporter for the BBC in the Middle East. She lives in London, UK.