On Becoming an American Writer: Essays and Nonfiction (Paperback) 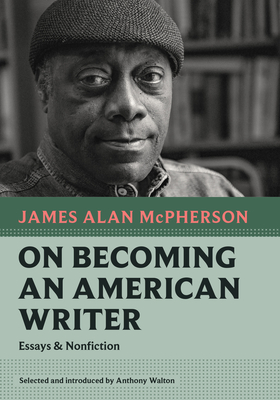 On Becoming an American Writer: Essays and Nonfiction (Paperback)

Discover the unique mind and humane vision of an under-recognized American author. Encompassing themes of race, education, fame, law, and America's past and future, these essays are James Alan McPherson at his most prescient and invaluable.

Born in segregated 1940s Georgia, McPherson graduated from Harvard Law School only to give up law and become a writer. In 1978, he became the first Black author to win the Pulitzer Prize for fiction. But all the while, McPherson was also writing and publishing nonfiction that stand beside contemporaries such as James Baldwin and Joan Didion, as this collection amply proves. These essays range from McPherson's profile of comedian Richard Pryor on the cusp of his stardom; a moving tribute to his mentor, Ralph Ellison; a near fatal battle with viral meningitis; and the story of how McPherson became a reluctant landlord to an elderly Black woman and her family. There are meditations on family as the author travels to Disneyland with his daughter, on the nuances of a neighborhood debate about naming a street after Malcolm X or Dr. Martin Luther King, and, throughout, those connections that make us most deeply human--including connections between writer and reader. McPherson writes of his early education, "The structure of white supremacy had been so successful that even some of our parents and teachers had been conscripted into policing the natural curiosity of young people. We were actively discouraged from reading. We were encouraged to accept our lot. We were not told that books just might contain extremely important keys which would enable us to break out of the mental jails that have been constructed to contain us." The collection's curator, Anthony Walton, writes, "In his nonfiction, McPherson was often looking for a way 'beyond' the morasses in which Americans find themselves mired. His work is a model of humanistic imagining, an attempt to perform a healing that would, if successful, be the greatest magic trick in American history: to 'get past' race, to help create a singular American identity that was no longer marred by the existential tragedies of the nation's first 400 years. He attempted this profound reimagining of America while simultaneously remaining completely immersed in African American history and culture. His achievement demonstrates that an abiding love for black folks and black life can rest alongside a mastery of 'The King's English' and a sincere desire to be received as an American citizen and participant in democracy. It is time for that imaginative work to be fully comprehended and for this simultaneously American and African American genius to assume a fully recognized place beside the other constitutive voices in our national literature."
This is a collection is for any reader seeking a better understanding of our world and a connection to a wise and wickedly funny writer who speaks with forceful relevance and clarity across the decades. On Becoming an American Writer is part of Godine's Nonpareil series: celebrating the joy of discovery with books bound to be classics.