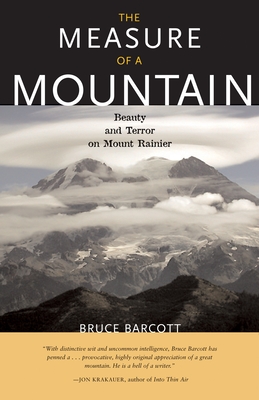 
Email or call for price
“With distinctive wit and uncommon intelligence,” a Seattle writer offers a “provocative, highly original” profile of Mount Rainier—capturing the majestic beauty and deadly allure of one of the largest active volcanoes in the U.S. (Jon Krakauer, author of Into Thin Air)

Mount Rainier is one of the largest and most dangerous volcanoes in the country, both an awesome natural monument and a formidable presence of peril. In The Measure of a Mountain, Seattle writer Bruce Barcott sets out to grasp the spirit of Rainier through an exploratory, meandering, and deeply personal journey along its massive flanks. From forest to precipice, thinning air to fractured glaciers, he explores not only the physique of Rainier but the psychology and meaning of all mountains—and the deep connection that exists between humans and landscape.

What he finds is a complex of moss-bearded hemlocks and old-growth firs, high meadows that blossom according to a precise natural timeclock, sheets of crumbling pumice, fractured glaciers, and unsteady magma. Rainier’s snow fields bristle with bug life, and its marmots chew rocks to keep their teeth from overgrowing. The mountain rumbles with seismic twitches and jerks, seeing one-hundred-thirty earthquakes annually . . . Rainier is an obsession, a temple that attracts its own passionate acolytes—from scientists and priests to rangers, and mountain guides—as well as a monument to death. Referred to by locals as simply “the mountain,” it is the single largest feature of the Pacific Northwest landscape—provided it isn’t hidden in clouds. Visible or not, though, Rainer’s presence is undeniable.

Filled with adventure, poignant personal reflections, and fascinating mountain lore told by Indian chiefs, professional guides, priests, and scientists, The Measure of a Mountain is one man’s stirring quest to reconcile with a dazzling creation of nature, at once alluring and sometimes deadly.
Bruce Barcott contributes major articles on environmental and adventure topics to Outside magazine. He is a former staff writer at the Seattle Weekly and has contributed to The New York Times Magazine, Men’s Journal, Harper’s, and Slate, among other publications. He has written a number of books, including The Measure of a Mountain: Beauty and Terror on Mount Rainier (1997) and The Last Flight of the Scarlet Macaw: One Woman's Fight to Save the World's Most Beautiful Bird (2008).
"With distinctive wit and uncommon intelligence, Bruce Barcott has penned a . . . provocative, highly original appreciation of a great mountain. He is a hell of a writer." &#8211;Jon Krakauer, author of Into Thin Air "Utterly absorbing . . . A marvelous bio