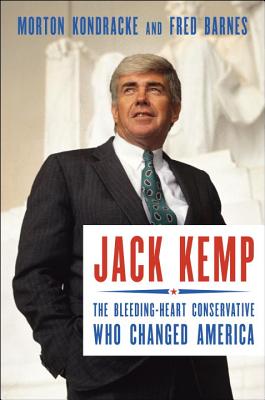 
Email or call for price
"THE PURPOSE OF POLITICS IS NOT TO DEFEAT YOUR OPPONENT AS MUCH AS IT IS TO PROVIDE SUPERIOR LEADERSHIP AND BETTER IDEAS THAN THE OPPOSITION." —JACK KEMP

The late 1970s were miserable for America. It was the post–Vietnam, post–Watergate era, a time of high unemployment, ruinous inflation, gasoline lines, Communist advances, and bottomed-out U.S. morale. In the 1980s, it all turned around: "stagflation" ended and nearly two decades of prosperity ensued. The Soviet Union retreated, then collapsed. America again believed in itself. And around the world, democratic capitalism was deemed "the end of history."

Ronald Reagan’s policies sparked the American renaissance, but the Gipper’s leadership is only part of the story. The economic theory that underpinned America’s success was pioneered by a star professional quarterback turned self-taught intellectual and "bleeding-heart conservative": Jack Kemp.

Kemp’s role in a pivotal period in American history is at last illuminated in this first-ever biography, which also has lessons for the politics of today. Kemp was the congressional champion of supply-side economics—the idea that lowering taxes would foster growth. Even today, almost no one advocates a return to a top income tax rate of 70 percent.
Kemp didn’t just challenge the Democratic establishment. He also encouraged his fellow Republicans to be growth (not austerity) minded, open their tent to minorities and blue-collar workers, battle poverty and discrimination, and once again become "the party of Lincoln."

Kemp approached politics the same way he played quarterback for the Buffalo Bills: with a refusal to accept defeat. Yet he also was incapable of personal attack, arguing always on the level of ideas. He regarded opponents as adversaries, not enemies, and often cooperated with them to get things done. Despite many ups and downs, including failed presidential and vice-presidential bids, he represented a positive, idealistic, compassionate Republicanism.

Drawing on never-published papers and more than one hundred Kemp Oral History Project interviews, noted journalists Morton Kondracke and Fred Barnes trace Kemp’s life, from his childhood through his pro football career to his influential years as a congressman and cabinet secretary.

As the American Dream seems to be waning and polarized politics stifles Washington, Kemp is a model for what politics ought to be. The Republican party and the nation are in desperate need of another Kemp.

MORTON KONDRACKE served as the executive editor and columnist for the Capitol Hill newspaper Roll Call and was the Washington bureau chief of Newsweek and a senior editor of The New Republic. He was a regular commentator on the Fox News Channel, a panelist on The McLaughlin Group, a cohost of The Beltway Boys, and a columnist for The Wall Street Journal. He conducted the Kemp Oral History Project and held the Jack Kemp Chair in Political Economy at the John W. Kluge Center at the Library of Congress. He contributes a blog, Pennsylvania Avenue, for Roll Call. His book Saving Milly was a New York Times bestseller.

FRED BARNES is the cofounder and executive editor of The Weekly Standard. He was the national political reporter for the Baltimore Sun from 1979 to 1985, then senior editor and White House correspondent for The New Republic for ten years. He was a McLaughlin Group panelist from 1984 to 1998. He is a political commentator on Fox News and was a cohost, along with Morton Kondracke, of The Beltway Boys on FOX News. He is the author of Rebel-in-Chief: Inside the Bold and Controversial Presidency of George W. Bush.

"Jack Kemp was the most forward-looking, open-hearted, big-tented Republican of our time (save, perhaps, Ronald Reagan). In this beautifully written biography, Morton Kondracke and Fred Barnes capture the energy, optimism, intellectual fire, and social conscience of this fascinating man."
—CHARLES KRAUTHAMMER, author of Things That Matter

"Jack Kemp was my mentor, and he inspired a whole generation of conservatives to think big. In this book, Mort Kondracke and Fred Barnes write with the same infectious energy that Jack had. Jack taught Republicans to speak to people’s aspirations, and this is the story of how he did it. Anyone who wants to spark an ‘American Renaissance’ should read this book."
—REP. PAUL RYAN (R-WI)

"I’ve long admired what Jack Kemp represented as an American statesman: the idea that reasonable people can come together, in spite of their differences, to advance policies that make America better. I was deeply touched by Jack’s personal interest in my own work, and I consider him a friend and a teacher. I hope more people are able to learn the lessons he helped teach me."
—SENATOR CORY BOOKER (D-NJ)

"Jack Kemp was one of those rare politicians who didn’t have a mean bone in his body. From the football field to the House of Representatives he was the same person—unfailingly upbeat, deeply committed to ideas, and able to talk with anyone in a way that reached them. In Jack Kemp we get the whole man whom we can admire and care for at the same time."
—BILL BRADLEY, former U.S. senator (D-NJ)

"Jack Kemp was an American original, big and bold in a political era that tended to produce small and safe men. Morton Kondracke and Fred Barnes give Kemp the biography he deserves, a vivid and memorable account of an energetic life."
—JON MEACHAM, author of Destiny and Power

"Kondracke and Barnes have teamed up again, this time to paint an engaging portrait of a man on a mission who had an outsized influence on the course of our country."
—SENATOR LAMAR ALEXANDER (R-TN)

"Jack Kemp was a man for his time and, as this compelling biography makes clear, a man for our time as well. Read it for his absorbing personal story and read it for his ideas as well."
—BRIT HUME, senior political analyst, Fox News

"Morton Kondracke and Fred Barnes capture Jack Kemp’s story in a sure-footed narrative that leaves no doubt about Kemp’s significance as supply-side evangelist and compassionate conservative."
—ROBERT W. MERRY, author of A Country of Vast Designs