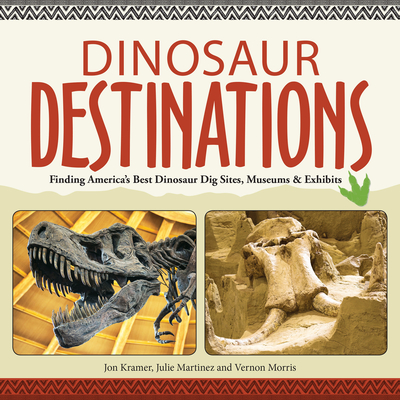 
Usually Ships in 1-5 Days
When it comes to dinosaurs and other fascinating fossils, the U.S. has it all, from Tyrannosaurus rex and Triceratops to Stegosaurus and Brachiosaurus. Dinosaur Destinations, by Jon Kramer, Julie Martinez, and Vernon Morris, will help you find the best dinosaur sites near you and across the country. Visit a dinosaur dig site or a famous dinosaur track site--and even make your own cast of fossilized tracks With details about the nation's best dinosaur-related locales, you'll learn what fossils have been found at or near each place, what kids will enjoy about each site, contact information and more. Plus, this field guide to extinct creatures introduces each species and includes their former range maps and fun facts. Dinosaur Destinations features: The most famous dinosaur dig sites, track sites and fossil locales in the U.S., including a few that allow visitors to participate in real dinosaur digs
Locations with unique opportunities for dinosaur fans, such as venues that allow you to touch real dinosaur fossils
Fascinating facts about the most famous dinosaurs and other prehistoric creatures
Notable non-dinosaur fossil sites and species, such as pteranodons, plesiosaurs, mammoths, and more

By the time he was four, Jon was digging fossils from Calvert Cliffs along Chesapeake Bay, unearthing fossil shark teeth from the famous Miocene sediments. His parents encouraged his passions as he was raised in the family rock and gem business. Jon is a graduate of the University of Maryland, where he founded the Geology Club and led field trips across the US in search of fossils. As an intern at the Vertebrate Paleontology Lab at the Smithsonian Institution, Jon helped prepare and assemble dinosaurs and fossil mammals for display in the exhibit halls. While there he developed relationships with leading paleontologists around the world and with many has authored numerous academic papers on a variety of fossil subjects. Jon founded Potomac Museum Group as a natural outgrowth of his museum experience and business background. During its 30-year heyday PMG dug fossils around the world and created traveling educational exhibits which toured North America for two decades. PMG also maintained a dinosaur dig site in Wyoming for nearly ten years starting in the late 1980s. These days Jon continues his paleontological passion, digging fossils and supporting research. Jon and his wife Julie regularly donate specimens to museums, universities, schools, and education groups.