Story Trumps Structure: How to Write Unforgettable Fiction by Breaking the Rules (Paperback) 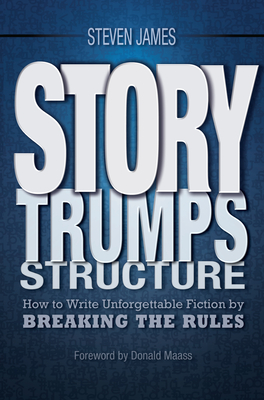 Story Trumps Structure: How to Write Unforgettable Fiction by Breaking the Rules (Paperback)

All too often, following the "rules" of writing can constrict rather than inspire you. With Story Trumps Structure, you can shed those rules - about three-act structure, rising action, outlining, and more - to craft your most powerful, emotional, and gripping stories.

Award-winning novelist Steven James explains how to trust the narrative process to make your story believable, compelling, and engaging, and debunks the common myths that hold writers back from creating their best work.

• Ditch your outline and learn to write organically.
• Set up promises for readers - and deliver on them.
• Discover how to craft a satisfying climax.
• Master the subtleties of characterization.
• Add mind-blowing twists to your fiction.


When you focus on what lies at the heart of story - tension, desire, crisis, escalation, struggle, discovery - rather than plot templates and formulas, you'll begin to break out of the box and write fiction that resonates with your readers. Story Trumps Structure will transform the way you think about stories and the way you write them, forever.
Critically acclaimed author Steven James has taught on writing craft and creative storytelling all over the world. He has written more than two dozen books that have won over a dozen awards, including two Christy awards for best suspense, The Suspense Zone's Reviewers Choice award, Suspense Magazine's Book of the Year award, four Storytelling World Honor awards, a nomination for an ECPA Gold Medallion Award and two Publisher's Weekly starred reviews.